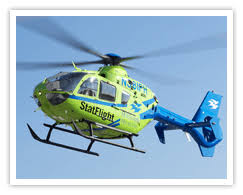 (NORMAN) – A Norman man was seriously injured after he was ejected from his pickup truck after it struck a Jackson County REMC utility pole Monday evening.

According to a Lawrence County Police report, 32-year-old Brent Restall was traveling north on Norman Road when he says the accelerator on his 1998 Ford F-150 pickup got stuck. That caused the truck to accelerate at a high rate of speed.

Restall lost control of the pickup and crashed into the utility pole, ejecting him from the truck.

While investigating the crash, deputies discovered Restall had been using his cell phone when the accident happened.

Restall complained of right shoulder pain, lower stomach, and hip pain and suffered a large cut on his head.

He was transported by ambulance to Camp Challenge where he was met by a StatFlight medical helicopter and then transported to the University of Louisville Hospital for treatment.

Police did request Restall submit to an alcohol and drug test. Those results are pending.