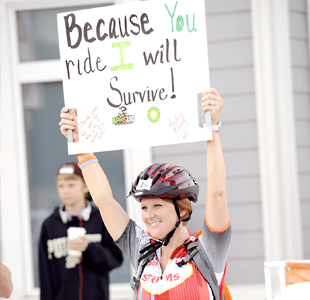 (INDIANAPOLIS) — More than 200 cyclists are setting out to raise $150,000 to make a difference in the lives of nearly 1 million people living with multiple sclerosis in the U.S. Cyclists will ride up to 100 miles over 1 day. Bike MS: Cruisin’ the Crossroads will depart from Boone County 4-H Fairgrounds in Lebanon on August 17 and conclude back in Lebanon after cyclists journey through Hoosier Heartland. The ride will feature three different routes from 25-100 miles.

This year, cyclists are inspired by a new study conducted by the National Multiple Sclerosis Society and published in the February 15, 2019, online issue of Neurology®, the medical journal of the American Academy of Neurology, which shows more than twice as many people in the U.S. are living with multiple sclerosis than previously thought. The previous studies estimated the prevalence to be 400,000, but this new study shows that the number is closer to 1 million.

“Twice as many people need a cure and to know they have a community to support them,” said Beverley Stafford, Executive Director, National MS Society, Indiana State. “With each pedal stroke and fundraising dollar, our cyclists are bringing us closer to our ultimate finish line – a world free of MS.”

Bike MS: Cruisin’ the Crossroads is one of more than 70 rides across the country hosted by the National Multiple Sclerosis Society.

This year, more than 80,000 people are expected to participate in Bike MS nationwide.

Primal is the Premier National Sponsor of Bike MS and the official National Cycling Apparel Sponsor. Primal also sponsors “I Ride with MS,” a special program recognizing Bike MS cyclists living with the disease. Pop Sockets and Shower Pass are the National Sponsors of Bike MS.

WHY BIKE MS: Bike MS brings people together as individuals and as teams to conquer a challenge and share an unforgettable experience with friends, family and coworkers—while raising money to make a difference in the lives of people affected by MS.

Multiple sclerosis is an unpredictable, often disabling disease of the central nervous system that disrupts the flow of information within the brain, and between the brain and body. Symptoms vary from person to person and range from numbness and tingling, to walking difficulties, fatigue, dizziness, pain, depression, blindness, and paralysis. The progress, severity and specific symptoms of MS in any one person cannot yet be predicted, but advances in research and treatment are leading to better understanding and moving us closer to a world free of MS. Most people with MS are diagnosed between the ages of 20 and 50, with three times more women than men being diagnosed with the disease. A recent study led by the National MS Society estimates that nearly 1 million people are living with MS in the United States; twice as many than previously thought.