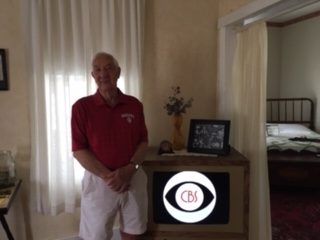 (MITCHELL) – To mark the 50th Anniversary of the Landing on the moon, many activities happened throughout the week last week in Mitchell, Indiana; the birthplace of Indiana’s own Astronaut Gus Grissom.

The brother of Virgil “Gus” Grissom – Lowell Grissom – stopped by the home place Saturday morning to talk with visitors about his brother, and discuss some of the things Gus contributed to the Space Program.

Lowell stayed overnight at the Spring Mill Inn before heading to North Vernon to give a speech.

“I think it is wonderful we are celebrating the Space Program. And it is wonderful that Gus had a great part of it. If it hadn’t been for Apollo and the mistakes that happened with it we would not have been possible to get the space program off the ground,” said Lowell Grissom.

“Gus was not only a pilot, or astronaut but an experienced engineer. Working on the GEMINI, project during the summers. Gus worked on some of the designs, features, and aspects of the spacecraft.  Some of the astronauts referring it to the GUS Mobile,” said Lowell Grissom.

Lowell Grissom graduated from Indiana University and “Gus” graduated from Purdue which produced a little kidding between the two. Lowell lived in the home for approximately 21 years, providing those touring the home on Saturday with some insight on exactly how it was back then.

Jane Prahlow and her husband Donald toured the home. Jane noted that it was neat to look at some of the things from that time period.

Mark Bryant and Steve Grissom were on hand Saturday to greet the guests and give tours of the home.

The living room television had a presentation from CBS; of one of the earlier missions that Gus was a part of. Sitting under the TV was a pair of boots that Gus’s father wore, as well as a chair that was a part of the home.

In the bedrooms are family photos. In Wilma’s bedroom on the bed lays The Mitchell Tribune with the account of the tragic day Gus and his co-astronauts died.

In the kitchen are mixers, toasters, and canisters that were around during the time era. An old game board that the family used to play every evening after supper is also in the home.

Virgil “Gus” was the second child of Dennis and Cecile Grissom, with an older sister dying in infancy. His sister Wilma and two other brothers, Norman and Lowell, all lived in the home. Grissom attended Riley School where the bricks of the school line the memorial at Mitchell’s City Hall in honor of Gus.

The home was renovated in 2000, and in 2013 the home was opened to tourists from May to October. The home was constructed around the 1800s and the family moved into the home around early 1920s and lived there until their deaths.

The group tried to get the home original to the period of around the 1960s as much as possible.

Saturday was a busier day according to Mark Bryant. Around 30 people took a tour of the home. The home is opened Saturday’s from 11 a.m. until 3 p.m. May through October.

On October 12, 2019, Joel Johnstone and Harrison Schmitt will be in town for the Galactic Gathering III.

Joel Johnstone is an actor and producer known for the Marvelous Mrs. Maisel in (2017), The Newsroom in (2012) and the Astronaut Wives Club. He will discuss what it was like to play Gus, his preparation of the role, behind the scenes, and his personal thoughts before the show.

Harrison Schmitt is an American geologist, retired NASA astronaut, university professor, former U.S. Senator from New Mexico, and as a crew member of Apollo 17, the most recent living person to have walked on the moon.

For more details or to order tickets go to www.gg19.eventbrite.com