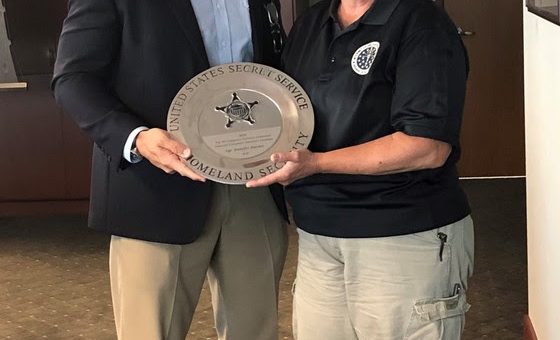 (INDIANAPOLIS)-An Indiana State Police Cyber Crime Investigator assigned to the Indiana Crimes Against Children Task Force was presented an award by the United States Secret Service (USSS) Friday morning at the United States Attorney’s Office in Indianapolis for her forensic examination data submissions into the Forensic Partner Reporting (FPR) System, which is maintained by the USSS.

Each year the National Computer Forensic Institute recognizes the top 50 examiners based upon the data provided to the FPR system. In 2018, there were 1,224 total state and local partner examiners and out of that total, 757 submitted FPR exam results for credit during the year.

Sergeant Jennifer E. Barnes, a 23 year veteran of the State Police, was awarded because her submissions into the FPR system earned her the ranking of 28thnationally.  Assistant Special Agent in Charge of the Indianapolis Field Office Andrew M. Campion said, “On behalf of the United States Secret Service I would like to recognize Sgt. Barnes for her work and say thank you to her and her entire team for all the work they do in combating cyber enabled crime”.

Indiana State Police Superintendent Douglas G. Carter commented, “I am extremely proud of Sgt. Barnes’ collaborative efforts and commitment in bringing to justice those who seek to capitalize on the victimization of children”.