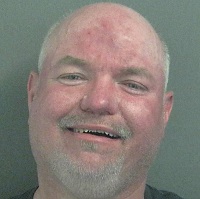 (SOLSBERRY) – A Solsberry man is accused of attempting to run into ex-girlfriend with his truck.

Police arrested 45-year-old John Nicholson, on charges of operating a vehicle while intoxicated, OWI endangerment, and criminal recklessness with a deadly weapon

According to a Greene County Sheriff’s Department report, Nicholson was upset over a break-up with his girlfriend. Late Saturday, June 23, Nicholson went to her home at Tulip Road and Lambert Lane and drove through her yard, ran over her mailbox and rammed into her vehicle and then attempted to hit her with his vehicle.

Police say in defense she smashed his headlights out with an axe.

The woman was able to then call 911. When police arrived they found him standing outside of his vehicle at the end of the woman’s driveway. When he saw police he attempted to leave, but police stopped him.

Nicholson showed signs of intoxication and was transported to the sheriff’s department where police say his blood-alcohol content was 0.15 percent.

Nicholson posted an $800 cash bond and was released from jail. He has pleaded not guilty and is scheduled for a pre-trial conference on July 29, at 2:30 p.m. in Greene County Superior Court.