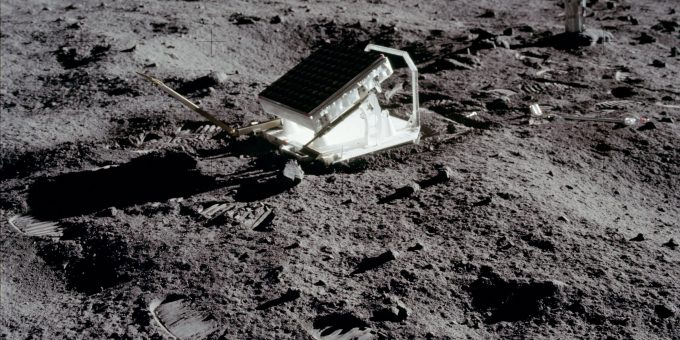 (YARDLEY, PA.) – As Indiana residents and businesses rely on GPS every day, they can thank the work of a fellow Hoosier who conceived and developed the Apollo 11 experiment. Thanks to his breakthrough work, GPS technology was able to take a “giant leap” forward.

While Neil Armstrong and Buzz Aldrin blasted off the lunar surface fifty years ago, the Apollo 11 moon mission continued: one experiment deployed at the landing site continues to operate to this very day. The success of the Lunar Laser Retro-Reflector, produced by Heraeus and Bendix Corporation, enabled astrophysicists to improve and advance GPS development. As the only continuously operating equipment remaining at the Sea of Tranquility, its starring role on a Season Three episode of “The Big Bang Theory” (The Lunar Excitation) is well deserved.

As it celebrates its 50th birthday, Lunar Laser Retro Reflector can now precisely measure the distance between the Earth and the Moon down to a single millimeter. The knowledge the experiment has produced since it was deployed by Buzz Aldrin has enabled telecommunications and ranging experts to bring precise, real-time accuracy to GPS technology. The experiment helped scientists better understand the gravitational forces influencing and interconnecting the orbits of the Earth, Sun, the Moon and space satellites, which are essential for GPS technology. Without this vital knowledge, the satellites and the Earth stations would not remain synchronized, causing GPS to be out of sync in a matter of minutes.

The father of this unique and important experiment is Dr. James Faller, who was born and raised in Mishawaka, Indiana. Faller initially conceived the idea while a physics graduate student at Princeton University in the late 1950’s. Faller wrote a paper, “A Proposed Lunar Package: A Corner Reflector on the Moon” in which he envisioned a durable, yet lightweight reflector could be deployed on the Moon. A laser beam would be targeted at the reflector; the instrument would detect the laser and reflect the light back to Earth. The travel time would be calculated to permit a precise earth-moon distance measurement.

In 1963, Dr. Faller joined JILA, formerly the Joint Institute for Laboratory Astrophysics, a joint research initiative sponsored by the University of Colorado and the National Institute of Standards and Technology (NIST). Faller organized a lunar laser ranging team to further develop and advance the project. As the Apollo program was attempting to win the space race with the Soviet Union, a highly-competitive “science race” was underway in the scientific community to see which experiments might be chosen for the historic first moon landing.

NASA’s strict criteria for size, weight and simplicity provided an advantage for Faller and the JILA team. NASA believed that Apollo 11 had a high risk for an abort, so any experiment had to be set up and deployed within 10 minutes. Faller said, “The astronauts had limited time to spend on the lunar surface to position the array aiming back towards the Earth. We were saved by the clock.”

Designed to meet NASA’s requirements to remain in operation for 10 years, the Lunar Laser Retro-Reflector exceeded its expected lifespan. One of the major reasons for its performance and 50+ year durability was the ultra-high purity fused silica Heraeus used to manufacture the array of 100 reflector mirrors. Dr. Grant Lu, President of Heraeus Quartz North America, said, “Impurities could negatively affect how laser light reflected off the mirrors. And ultra-high pure fused silica is one of the few materials capable of resisting ionization radiation, micro-meteor impacts and degradation from the harsh environment of space.”

Another advantage came with the triple-prism design of the 100 fused silica reflector cubes provided by Heraeus. A simple mirror would always need to be exactly perpendicular to the incoming light, a rare occurrence due to the rotation of the Moon on its own axis and its rotation around the Earth. The triple-prism retroreflectors, consisting of three surfaces mutually perpendicular to each other, would allow the incoming light to enter the optic, reflect off each surface one at a time and exit back in the opposite direction from which it came. Buzz Aldrin was able to quickly deploy the experiment because it did not require a precise placement on the lunar surface.

“The work of Dr. Faller was invaluable to the eventual development of GPS technology,” said Dr. Todd Jaeger, Global Director of Commercial Optics for Heraeus Conamic, and a laser ranging research scientist.  “If the Lunar Laser Retro-Reflector experiment had not been selected for Apollo 11, or was not successful, it is doubtful the development of GPS would have advanced as quickly as it did. We might be still be using paper road maps in our cars or stopping at gas stations to ask for directions.”