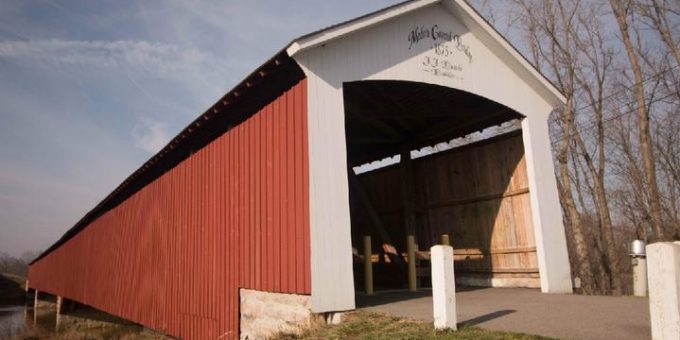 Many individuals come to see the bridge from all over the nation. It is considered one of the longest in the United States. Efforts to repair the bridge and upkeep the area around the bridge were finished around 2011.

One of the overseers of the project is Morris Tipton. Tipton joins a group of 11 other individuals who call themselves Friends of the Medora Bridge Group. The group meets every three months or as needed to tend to the business affairs and upkeep of the bridge.

The Medora Bridge was constructed in 1875 after the price of using ferries to cross the river became too expensive for farmers and businesses who relied on the use of the ferry.

The bridge cost $18,000 to build, and bonds were raised to pay for the construction of the bridge.

The group has found the original contract to build the bridge and they have a copy of that contract.

During that time the bridge was the main travel route in the area, as U.S. 50 was not yet built. Horse and buggies used the 610 foot-bridge. Later, vehicles and trucks from the brick plant, lumber company and feed mills all used the bridge.

There were four covered bridges that were constructed in Jackson County to cross the White River.

At present, the roadway on the east side of the bridge is washed out, but people can walk and bike across the bridge.

Recently, the bridge was vandalized with graffiti and it was covered up by the Jackson County Highway Department but vandalism to the bridge has been ongoing. In the past there were also three attempts to burn the bridge down.

The group is hoping to install security cameras to monitor the bridge, which is one of the key reasons for this year’s fundraiser.

There is some question on who will be responsible for monitoring the cameras; the group hopes to have those details worked out at a later time.

On the menu this year is roast beef and ham, scalloped potatoes, green beans, rolls, homemade pie, tea, lemonade, and water. Ladonna Country Cooking Diner from Salem will be catering the meal.

In the last two years, the event has sold out.

Tickets can be purchased by going to the Jackson County Visitors Center or online at MedoraCoveredBridge.com.

The group will be by the Antique area of the Jackson County Fair on the week of July 21, 2019 were you can come out and meet them and discuss the bridge.