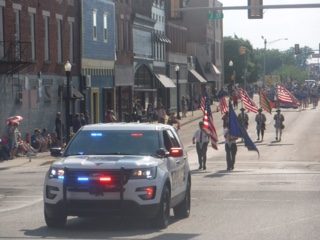 (BEDFORD) – The Limestone Heritage Festival was two days of jam packed fun for the city to celebrate it’s limestone heritage and the nation’s birthday.

There was plenty of food, entertainment, and activities for the whole family to be part of. Friday started off with food vendors who offered food ranging from tiger ears, to BBQ, and ice cream to cool off.

The rotary fish fry was able to quench taste buds Friday evening and started around 4:00 p.m. and concluded around 7:30 p.m.

On Friday evening Stone Carnival and Summertime Band hit the stage to entertain festival goers for the night. Stone Carnival came all the way from California to their hometown of Bedford, Indiana to celebrate with friends and locals.

On Saturday morning, the pancake breakfast was a fabulous way to start the day. The event raised money towards the upkeep of the building. Hundreds came to devour pancakes, sausage and a beverage which cost $5. The Bedford Middle School Cheerleaders also helped clear tables for the festival for a fundraiser.

Those interested in stone carving could make their way to see local talent turn limestone into sculpture. They met people like James Lax and Marty Staggs who could be seen outside the Depot working on their next masterpiece.

“I was really saddened to find out about the passing of Judy Elliott. I always got a hug from her every time she saw me. The hospitality from the Bedford residents is just awesome. Being from Bloomington you do not get the southern hospitality like you do in Bedford,” James added. “I started coming down here when you had the stone carving exhibits at the Boys Club a few years back. And I love to come every year; love your local carvers like Lou Bretta.”

The farmer’s market was another place that many where able to purchase homegrown produce as well as other crafts and products. Lincoln Elementary School raised their produce this year; all from a garden that they tended to by themselves.

The parade was started off with the Flag Raising Ceremony with Mayor Shawna Girgis singing the National Anthem. The ceremony then went on to honor this year’s grand marshal, Mark Scherschel.

The parade then made it’s way through downtown with the Bedford Police Department leading the way followed by normal parade entries. Entries ranged from marching bands, firetrucks, military vehicles, tractors, and horses.

The Rotary Club handed out flags prior to the parade to add to the patriotism of the parade.

Music entertainment on Saturday evening included Mr. Taggart as well as Soul Street, who entertained the crowds until the fireworks.

The fireworks were full of awe, wonder and booms and lit up the night sky.

The fireworks were interrupted due to a small shrubbery fire which ignited about twenty minutes into the display. Smoke could be seen billowing from behind the Lawrence County Museum.