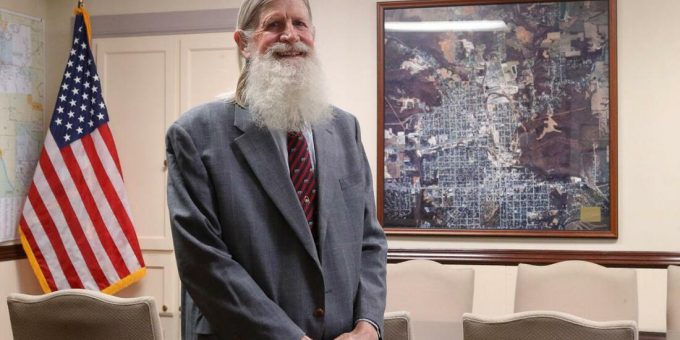 The 2019 Limestone Heritage Festival Parade theme is “America the Beautiful” and will step off at 6 p.m. Saturday.

Mark was born at Dunn Memorial Hospital in Bedford, on December 10, 1949 to Dr. John P. and Tressie S. Scherschel.

He lived at 1713 H Street until going to Indiana University in 1968. Attended kindergarten at Parkview and then eight years at St. Vincent de Paul School.

In high school, Mark played the trombone in the band and was track/cross county manager. He earned the Eagle Scout Rank in 1964.

Mark graduated from Bedford High School and earned a bachelor degree in Zoology and an MBA in Health Care Administration, with a minor in accounting at Indiana University.

He delivered newspapers for the Indianapolis Star for six years. Worked at Boy Scout camp for six years as a lifeguard, shooting sports director and camp director.

Mark worked as an orderly at Bloomington Hospital in 1971-1972. Worked for a small public accounting firm in Terre Haute from 1976-1982 becoming a Certified Public Accountant in 1979.

He operated a public accounting firm in Bedford from 1982-1987. Taught Accounting and business-related courses at Oakland City University in Bedford 1982-1984 and 2000 and Ivy Tech Community College in 2006.

He served on Bedford City Council from 1987 and was elected to eight successive terms and continues to serve today.

Mark served as precinct chairman when living in Terre Haute. Served on Lawrence County Community corrections board as a member and president for 20 years, served on the Board of Bedford Revitalization, Inc. from its inception until 2006. As a city councilman member at large, served on the salary committee, tax abatement committee, Redevelopment Commission, White River Port Authority, Historic Review Board and was President of the Council.

He is a member of St. Vincent de Paul Catholic Church and the church choir,

For more than 50 years he has been a member of the Boy Scouts serving more than 30 years in various district-level positions as well as Cubmaster and Scoutmaster for Pack and Troop 333.

He has been a member of Knights of Columbus for more than 40 years.

Susan worked as a Medical Technologist at Dunn Memorial Hospital for more than 25 years and now works for Ascension Technologies (an affiliate of St. Vincent Dunn Hospital) as a Senior Technology Analyst.

Mark and Susan are currently building a house on several acres where they are establishing a horse farm for boarding and teaching horsemanship skills.