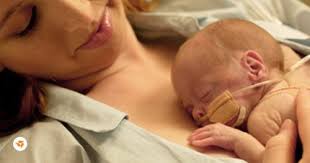 (BLOOMINGTON) – At IU Health Bloomington Hospital, the number of hours new babies is cuddled skin-to-skin is an important part of their hospital stay.

The practice – often called Kangaroo Care – begins at birth between mother and baby when the unclothed newborn is laid directly on the mother’s chest to begin its transition to the outside world. Often times, dads participate in the practice, too.

IU Health Bloomington Hospital has been practicing skin-to-skin for more than a decade. It is heralded by physicians and nurses as a worthy protocol to help in the baby’s early development and throughout life.

For the second year in a row, IU Health Bloomington Hospital staff took the practice to a new level, measuring the number of hours logged for skin-to-skin care in a two-week period from late May to early June. The results were entered into an international contest sponsored by Sunnybrook Hospital in Canada. A total of 135 hospitals from Saudi Arabia, the United Kingdom, Switzerland, Australia, Israel, Canada, Serbia, South Africa, and multiple states here in the U.S. including, Nevada, Arizona, Texas, New York, New Jersey, Georgia, California, and Indiana entered the contest.

While the International award went to the United Kingdom, IU Health Bloomington Hospital was notified that it ranked highest among all US entries.

“We logged more hours of holding per baby born during our two-week event than any other similar participating hospital in the United States,” says Wendy Horton, Manager of Clinical Operations NICU/Pediatrics at Bloomington Hospital.

“And, we also increased our holding times per baby from last year. Each newborn received an average of 2.96 hours of holding time, compared to 1.68 hours in 2018,” Horton says. All told, the team logged more than 1,000 hours.

Among the benefits of skin-to-skin cuddling are the immediate results of thermoregulation, but it also is shown to improve brain development, decreased pain, improved sleep and improved growth.

“Incorporating skin-to-skin into care is an all-team effort,” she adds. “The doctors discuss it in rounding, the lactation consultants recommend it, there is education available for parents and we encourage our entire nursing team to get involved – even with the tiniest infants who might be in incubators. It’s really important to the development of children.”