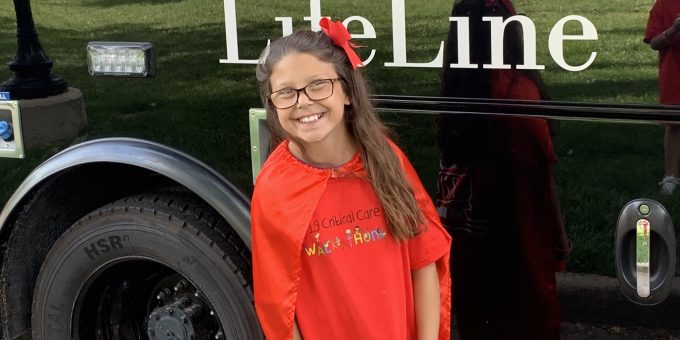 (BEDFORD) – Brylee Holquin was airlifted immediately to Riley Children’s Hospital at birth; she was literally blue when she was born.

Now 10-year-old Brylee is living an active life thanks to the efforts of the doctors and nurses at Riley’s Children’s Hospital.

“Because of Riley, I am a cheerleader, in gymnastics, and ballet,” Brylee said. Brylee is energetic, enthusiastic and has a positive attitude serving Riley Hospital as an Ambassador.

Brylee is making appearances in Indianapolis, Evansville, and other locations across the state telling her story, and sharing about the wonderful care she received at Riley Children’s Hospital.

Brylee was crowned Miss Awareness and Queen. She took part in walks and radio programs.

Brylee so far has undergone two open heart surgeries, and ten other surgeries along with several heart ECHO’s and EKGS to treat her and determine how she is doing. Brylee still endures several doctor visits, and currently experiencing some thyroid issues.

“She is here today, because of all the things that Riley has done for us,” said Brylee’s mother Mandy Ramey. Brylee’s heart is basically reversed, and research continues with the medical issue.

” I would like to be a cardiac surgeon to be able to help someone with the same condition as myself,” said Brylee. “My favorite doctor is Dr. Hoyer he is just an excellent doctor. The nurses and doctors, as well as child life specialists, are awesome. They help keep our minds off the surgery.”

Mandy says families can stay at the Ronald Mcdonald House while their child is in the hospital.

“Families are faced with a lot of expenses like traveling to and from the hospital,” Mandy added. “Part of the fundraising will go towards making sure the families have a place to stay.”

“I have a wonderful family, Mandy and Seth Ramey, as well as siblings Avirana Holguin, Kelsi, and Kensi Allen,” said Brylee.

Brylee is a 4th grader at Stalker Elementary School and a member of the Hillcrest Christian Church. She participates in Dance Marathons at Bedford-North Lawrence High School and performed in front of more than 4,000 people at one time.

“And I have met many other friends through being a patient at Riley especially my friend Marley Davenport,” Brylee added.

Brylee will be helping to raise much-needed funds at Rally for Riley on Saturday.