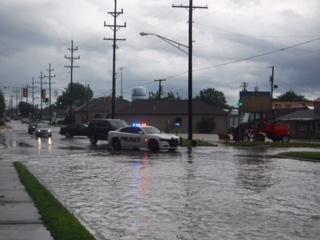 (BEDFORD) – The weather continues to cause damage and create flooding all over Southern Indiana. On Sunday, morning a tree fell on the home of Andrew Hillenburg in Avoca. The tree fell on his home at approximately 5:30 a.m.

Flooding of streets, roadways, and interstate was reported all over the state. Including Interstate-65 in Seymour, Interstate 64 near Eckerty, Indiana, and street flooding in Jasper. And major flooding was reported around Brown County on Monday.

Locally, flash flooding of streets throughout Bedford was reported including M Street between 15th and 16th. As well as Fifth Street between P Streets and Q streets. The area around the trestle on O street also had a large amount of flooding. The large volume of water could be seen going over State Road 58 at the State Road 37 intersection.

” I have lived here for over 20 years and have not seen it flood as it has lately.” Sherry Gray resident on Fifth Street. ” After they did the work there on Lincoln Avenue and Fifth Street seems the flooding has moved up to us. Our neighbor can no longer park on the street for fear of flooding every time it rains now.” Gray added. Gray lives along Fifth Street near the intersection of Q Street. Bedford Police Department shut down the roadway to prevent drivers from driving in the flooded street. There was a large amount of rain that dumped on the city when the flooding occurred. Within several minutes the roadway was back opened up.

Residents are reminded to never drive in flooded waters. ” Turn Around Don’t Drown” is the number one safety rule when flash flooding occurs. Motorists are not able to see any damage to roadways, or flood waters of only 3 inches can sweep a vehicle away in flooded waters.