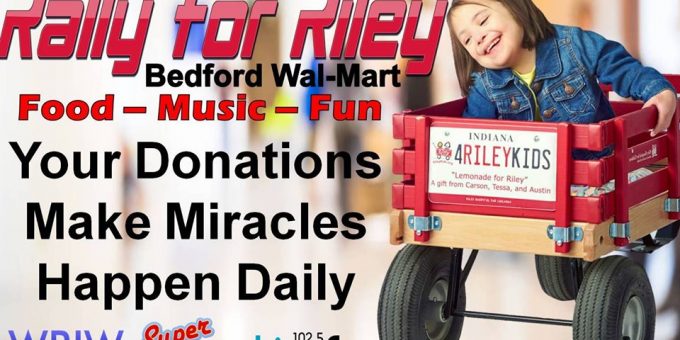 (BEDFORD) – Eugene Kim of Bloomington is a committee member of the Riley Children’s Foundation Bloomington Regional Advisory Council. He is asking the public to support Rally for Riley.

Kim sits on the committee along with Susan Gales of Bedford. Both work to represent Monroe and Lawrence County.

“Growing up in Chicago, I really didn’t know much about Riley until I met my wife,” Kim added. “She had seen a Riley doctor as a teenager. Without Riley, I may have never met her. So I thank Riley for the care they gave her during her teenage years. Because of her condition, there is still a chance that our daughter could be diagnosed with the same condition. We visit Riley annually for check-ups.”

The committee raises awareness of the great work that Riley is involved in – from day-to-day care to research that keeps up with modern advances in medicine.

“As bad as we think we have it, we are constantly reminded that people are going through so much more,” Kim added. “As a parent, most can relate to the weight of having the responsibility of keeping your child safe and healthy. Knowing there are families out there dealing with worse health conditions than our own makes you want to be in a position of help. We learn daily the different ways Riley has impacted our very own community and you certainly want to position the Foundation and Hospital to help every family whose child is in need of care.

Ayden Wagler is the happiest kid you will ever meet.

“She is a hugger,” says her mother, Angie Wagler. “Ayden is determined, outgoing and does not know a stranger.”

The fifth-grader is a multi-sport athlete who hopes to be a cheerleader when she gets to middle school next year. The fact that she moves through life with the help of a prosthetic leg seems to fuel her determination rather than limiting her ambition.

At 8 months old, Ayden was diagnosed with neurofibromatosis (NF) and pseudarthrosis. NF is a rare, progressive disorder that causes tumors to grow inside and outside of the body. It affects about one in 3,000 children, and five percent of children with NF will develop long bone pseudarthrosis, a condition which causes spontaneous bone fractures.

Ayden’s family chose Riley Hospital for Children at Indiana University Health for much of her treatment. At age 3, it became clear Ayden’s leg would not heal properly after a fracture. Her family decided to have it amputated to improve her quality of life. Not even that, significant surgery could slow her down.

“When she went through the amputation, she was bouncing on the trampoline a week later,” Angie says. “She got me through that tough time. She is unstoppable.” Ayden even participated in a T-ball game soon after surgery, hopping around the bases on one foot because it was too soon to use a prosthetic leg.

Now 11 years old, Ayden travels to Riley several times a year and sees Riley Pediatric Neurologist Aline Hamati, M.D. “Ayden has always struck me as a beautiful, strong girl, full of life, who is always positive and very active. She is a fighter and a very fun girl,” Dr. Hamati says.

“I’m happy to tell people about NF or show them my prosthetic leg,” Ayden says. “It is a part of who I am, but really, I am just a normal kid who likes softball, crafts, and dolphins.”

While there is no cure for NF, there is hope. Riley/IU School of Medicine physician-scientists have been awarded a prestigious five-year, $12 million grant from the National Cancer Institute’s Specialized Programs of Research Excellence Initiative (SPORE) to study NF closely. Wade Clapp, M.D., Chairman of the Department of Pediatrics at the IU School of Medicine, and his colleagues are leaders in neurofibromatosis research. In 2008, their team reported that the drug Gleevec appeared to be the first effective treatment for some patients with NF type 1 tumors. Subsequent work by Dr. Clapp and his colleagues led to the testing of two other drugs that are also significantly reducing these tumors in children and adults with NF1.

“It makes me feel wonderful that Riley is researching NF,” says Angie. “Hopefully, the new research will bring them closer to a cure, and children with the disease will have a better life.”

Not many young people would be open about having an inflammatory bowel disease (IBD). But Allie Shute, 11, wants you to know that Crohn’s Disease is simply a part of who she is. She’s upbeat “because that’s how I was before I had Crohn’s,” she says. “I like being happy.”

The sixth-grader at Jackson Creek Middle School in Bloomington also likes crafts and performing in community and school musicals. “Nobody knows her as the girl with an IBD,” says her father Jason Shute. “They know her as Allie.”

She was diagnosed at age 8 but had been having trouble for a year or more – “as we look back, maybe even longer,” says her mother Michelle Qualley. Allie didn’t look ill, but when her stomach started hurting, her parents had to hurry home with her, which other people often didn’t understand. The family was just a few hours into their drive on a much-anticipated trip to Disney World when Allie’s symptoms acted up. Jason turned the car around.

That’s when Allie’s parents sought answers at Riley Hospital for Children at Indiana University Health, and Riley Pediatric Gastroenterologist Shamaila Waseem, M.D. “First of all, she’s super nice,” Allie says of Dr. Waseem. “She helps by telling me what I don’t want to hear, but in the nicest way possible.”

Allie visits Riley every eight weeks to receive infusions of a drug that keeps her disease in remission. Dr. Waseem credits Allie for taking charge: “She’s a smart girl and has a great family,” the physician says. “They ask the right questions. Allie knows everything about her body, her disease and how it’s treated.”

Allie is a strong advocate for Riley and the Crohn’s and Colitis Foundation. She also formed a small supportive network in Bloomington that brings kids with chronic conditions together for community service and other activities: “We do tons of fun stuff. And the parents get to talk, and they like that.”

Soon after her diagnosis, Allie sought out former Riley Champion Sneha Dave, now an Indiana University student who recently climbed Mt. Kilimanjaro despite her long battle with an IBD. Sneha nominated Allie for the Riley Champions program. “While Allie’s family is incredibly supportive,” Sneha says, “her desire to make a change comes from her genuine spirit.”