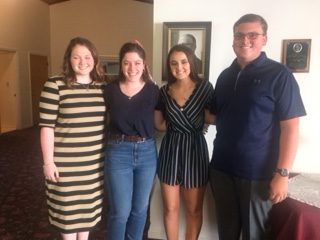 (OOLITIC) – The Oolitic Kiwanis Club awarded four scholarships Thursday evening at the Oolitic Baptist Church. Each student was given a check for $500.

The organization typically only gives three scholarships a year, however thanks to the fundraising efforts from their monthly fish fry they were able to award four.

This year’s scholarships were given to Gracie Flinn, Lauren Winnefield, , Savanna Van Hoy and Kenton Pardue.

Gracie Flinn – will be attending the University of Indianapolis studying neonatal nursing. In high school she was a part of HOSA, which visited nursing homes and hospitals. She was a member of Beta Club, National Honor Society, and National Technical Honor Society.

Lauren Winnefeld – will be attending Indiana University studying journalism. Lauren was a member of the Key Club, History and Latin Clubs and National Honor Society. Lauren’s brother passed of cancer a few years back and supports the Bat Cole Organization. The organization raised funds for Neuroblastoma. So far, the organization has raised more than $150,000. Winnefdld handles social media for the organization.

Savanna Van Hoy – will be attending Franklin College studying elementary education. Savanna volunteered at Lawrence County Boys and Girls Club, where she coached volleyball at the club and was on the BNL volleyball team. She volunteered at Becky’s Place. Savanna was a cadet teacher at Shawswick and was very saddened to see Mrs. Vice retire as a school teacher. Despite all the negative view of teaching, she feels that teaching is an important profession, and can impact many lives.

Kenton Pardue – will be attending Rose-Hulman Institute studying civil engineering. Kenton volunteered at Bertha’s Mission, Salt Creek Festival, was a member of the Renaissance Club, BETA Club, and was a 4-H club member for eight years. He also served as a mentor in the Alumimosity Robotics Group.

The Oolitic Kiwanis Club was charted in 1983, and one of its members, Delvin Nikirk, is still active at 91 years of age. The National Organization was started around 1915 and was one of the first organizations to Help Riley’s Children Hospital.

Oolitic Kiwanis locally continues to contribute to children and local projects to help the community. All the proceeds raised by the organization is distributed back in some form or other. Some of the projects include backpack programs at Oolitic and Fayetteville, Honor Ribbons, Key Club at Bedford North Lawrence High School, and address different needs that may arise in the community.

There are currently 15 members in the organization and they would like to have several more. They continue to have a regular monthly fish fry to continue to give back to the community.