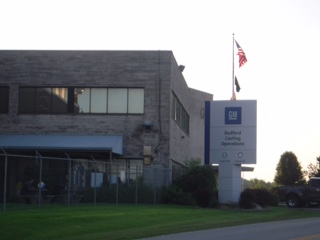 (BEDFORD) – General Motors continues to keep communications open to keep the public informed on the progress being made following the PCB contamination and clean up around Bedford GM Powertrain.

Ed Peterson, Project Manager for General Motors, detailed some of the things they have been working on over the last six months to a year. The clean up has included more than a five-mile area to Pleasant Run Creek and Bailey Branch located north of Bedford.

According to Peterson, the monitoring of seeps and springs located in the area continues, to make sure the measures and wells that were constructed are working correctly. They also continue to make sure there is no further contamination that may have overlooked.

Peterson states that they will monitor the wells and have used thermal imaging to detect any additional seeps or springs that may have bypassed current wells already in place. They will be placing either a red or green dye down these water paths to make sure they end up in the collection sites already constructed.

In the coming months, they will be asking nearby property owners for access, to help them do some additional testing in the area, and confirm there is no new contamination that they may have missed.

Peterson says with the current monitoring and reports that they are looking very positive at our existing well sites. The corrective measures are working and PCB contaminations are below the EPA standards within the area.

At one location, there was still some water and oil collected, but less than 25 gallons, and that is an expectable level. The contaminated water was disposed of at a designated facility. There is currently one location off to the North of the plant on Breckinridge Road that has some contamination. Approximately, 2,000 cubic yards will have to be removed. At this point, an evacuation plan to have it removed is being reviewed by the EPA and the Indiana Department of Environmental Management.

A perimeter fence around the property has been constructed at the request of General Motors, and the wells are currently being monitored. The water treatment facility located across the street on GM Drive is working and being watched.

Currently, the attendance of the public meetings had decreased following almost eight years when the cleanup first got started. They continue to keep nearby residents informed by mail and by a website: www.BedfordPowertrainCorrectiveAction.com or call (812) 277-8954 for any questions regarding the cleanup.

At this point, GM officials conduct at least two semi-annual meetings but shortly will reduce those to an annual public meeting.  The monitoring and corrective actions will still be continuing at least for the next three years and based on any findings the EPA and IDEM may request additional measures.