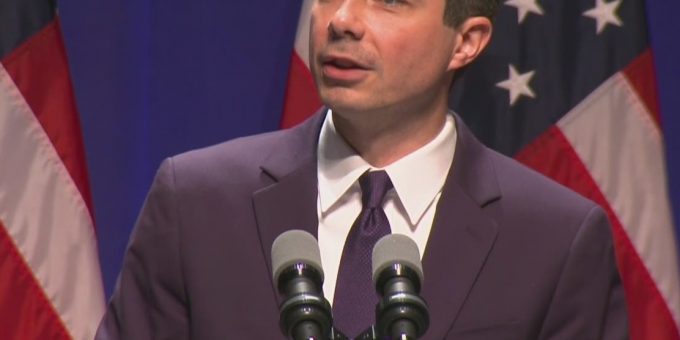 Buttigieg, 37, was given a standing ovation as he stepped on stage before a packed auditorium.

Buttigieg is one of several youthful Democratic veterans seeking the White House, along with Rep. Seth Moulton (Mass.) and Rep. Tulsi Gabbard (Hawaii).

As with many Democratic presidential contenders, Buttigieg said he would put climate change at the forefront of his foreign policy, calling it an “existential security challenge,” which drew cheers.

“I believe that the next three or four years will determine the next 30 or 40,” Buttigieg said, speaking in a dark suit before American flags in Bloomington, Ind. “I do not aspire to deliver a full Buttigieg doctrine today, but I will illustrate how my administration would manage global issues.”

While Buttigieg offered a sharp critique of Trump’s “trade wars,” “tantrums,” and “foreign policy by tweet,” he also warned Democrats that they must offer voters a new vision for a nation and fast-changing world that does not “turn the clock back to the 1990s.”

“Despite what we hear from this administration, and far too many Republicans in power, climate disruption is here,” Buttigieg said. “It is no longer a distant or theoretical issue, it is a clear and present threat.”

Buttigieg said he is not an isolationist, but he wants to see more congressional involvement in decisions of war and intervention abroad. He said his view on this front has been deeply shaped by his own experiences in recent decades, from watching the World Trade Center collapse on television as a college student to when he served as a naval intelligence officer in Afghanistan.

It is time, Buttigieg said, to “put an end to endless war” and for Congress to be an active participant on U.S. troop authorization. He called for an overhaul of the sweeping war powers that have been asserted by the executive branch following the 9/11 attacks.

“The lesson of the Iraq disaster,” Buttigieg said, is that there is “nothing wrong with standing for American values,” but any military action “must be strategic and legitimate.”

He called on Congress to take initiative with these issues as well.

On national security, he outlined his plans to improve mental healthcare for veterans, increase the emphasis on cyber defense and change trade policies used by the current administration.

As with many Democratic presidential contenders, Buttigieg also said he would put climate change at the fore of his foreign policy, calling it an “existential security challenge,” which drew cheers.