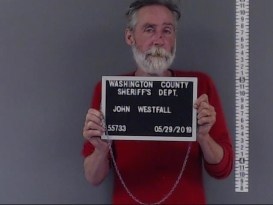 (SALEM) – A male inmate found dead in his cell at the Washington County Detention center on Friday, May 31 has been identified.

According to Washington County Sheriff Brent Miller, 54-year-old John M. Westfall of Salem was booked into the jail at 11:21 p.m. on Wednesday, May 29 on charges of driving while intoxicated with a blood-alcohol level of 0.15 percent or greater.

Westfall was found dead by a jailer on Friday.

An autopsy revealed the cause of death to be severe cardiomyopathy, a type of heart disease.

In most cases, cardiomyopathy causes the heart muscle to become enlarged, thick or rigid. In rare instances, diseased heart muscle tissue is replaced with scar tissue.

As cardiomyopathy worsens, the heart becomes weaker. The heart becomes less able to pump blood throughout the body and incapable of maintaining a normal electrical rhythm. The result can be heart failure or irregular heartbeats called arrhythmias.