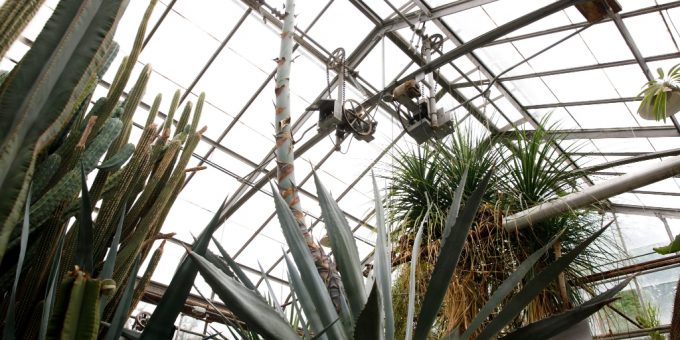 (BLOOMINGTON) – Rising out of the Jordan Hall greenhouse, the single stalk reaches to the sky as if it sprouted from magic beans.

But there’s no mythical giant at the top of this stalk along Third Street. Instead, this sprout is more closely related to asparagus, as well as plants used to make rope and tequila.

There’s an air of mystery to the decades-old Agave americana — its exact age and when it will flower are unknown.

Agave americana is native to Mexico, and once its stalk stops growing, it will bloom with clusters of lateral yellow flowers before dying. Most live to be between 20 and 30 years old, despite its common name “century plant.”
MJ Slaby, of News at IU reports, as of May 20, the stalk of the Agave Americana has sprouted horizontal branching for its flowers.

“It’s an iconic plant in the Southwest,” said Eric Knox, director of the IU Herbarium and a senior scientist in the IU Bloomington College of Arts and Sciences’ Department of Biology. “Right now, it looks like an asparagus stalk, but it will flower with beautiful yellow flowers all over.”

When that happens, it will be a first at the greenhouse outside Jordan Hall.

The century plant has been at the greenhouse for decades. It was there before supervisor John Lemon started in 1972. He estimated that the plant is at least 50 years old.

While the soon-to-be flowering stalk currently extends outside the greenhouse, on the inside, the plant’s broad leaves stretch out at the base for more than 6 feet in the desert room.

It was a change in those leaves that first tipped off Lemon that blooms could be coming.

“The plant is mostly unremarkable, but around February, something seemed odd. The leaves in the middle were smaller than normal, so it made me wonder if it was going to bloom,” he said.

When the flowering stalk started to grow, it started taking on the shape of a hook, but then it straightened out and started pushing up to and past the 17-foot-tall greenhouse ceilings. It grew several inches each day and is still growing, Lemon said. The stalk is expected to reach up to 30 feet. Currently, it’s an estimated 23 feet tall.

Lemon and others aren’t sure when exactly to expect the flowers or how long they’ll last.

“It’s rare to have one bloom inside, mainly because it takes so long,” Lemon said, adding that it’s one of the oldest plants in the greenhouse’s desert collection.

Accustomed to Mexico and the southwestern U.S., the century plant wouldn’t make it in Indiana’s cold, wet weather outside the greenhouse, he added.

While other species of Agave are more suited for making tequila and using fibers for ropes and baskets, the Agave americana can be used to create an alcoholic drink called pulque.

If the flower stem is cut before flowering, the sugar water that the plant was using to nourish the flowering stalk gathers in the base of the plant, Knox said. Think of it almost as sap from sugar maple. That liquid can be fermented to make pulque.

To figure out when the century plant might bloom, IU biology staff turned to the Matthaei Botanical Gardens at the University of Michigan, where a variegated Agave americana bloomed in 2014. There, it was about six months from the sighting of the stalk to the first flower.

Under that timeline, IU’s plant would bloom in August for one or two months. But that’s only a guess, Lemon said.

After the plant blooms and dies, the time will come to dismantle and remove the plant from the greenhouse, Lemon said. He said it would be bittersweet to see the plant go, but it will free up space for other desert plants, especially those that are currently under the shade of the broad leaves of the Agave americana.

Plus, Lemon and Knox pointed out that while the large plant will be gone, it’s already spreading sprouts of new plants to continue its legacy. Several are already in pots inside the greenhouse.

Until then, all eyes are on the century plant.

“Right now, it looks like giant asparagus coming out of the greenhouse. But that will change,” Knox said. “It’s something worth keeping an eye on.”