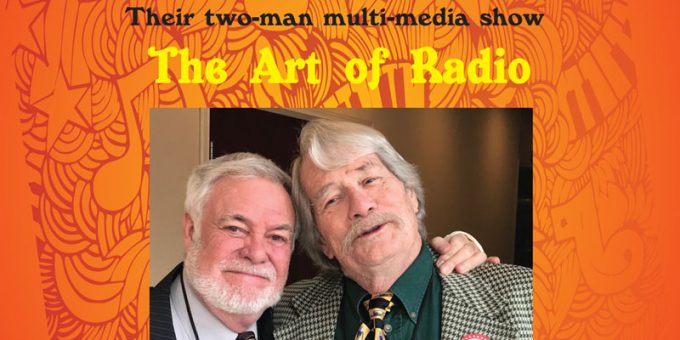 (UNDATED) – The Friends of the Firehouse Follies and the Bloomington Writers Guild announce two shows featuring David Ossman and Phil Proctor – “What’s Left of the Firesign Theatre” – in Nashville and Bloomington, at the end of May and beginning of June.

Ossman and Proctor were a part of the four-person team that made up the original “Firesign Theatre,” an iconic comedy group that got its start on listener-supported radio in Los Angeles in 1966. The group was nominated for three Grammy awards, and was named by Entertainment magazine as one of the “Thirty Greatest Acts of All Time.” The other two members of the Firesign team, Peter Bergman and Phil Austin, have passed away, but Ossman and Proctor continue to perform.

They will bring their two-man multi-media show, “The Art of Radio,” to the Brown County Playhouse in Nashville, on Friday, May 31, and will make guest appearances on the Firehouse Follies, a live radio variety show on WFHB community radio in Bloomington, on Sunday, June 2.

The Nashville show will begin at 7:30 p.m., a question and answer session will follow. Tickets are available at https://www.browncountyplayhouse.org, and at the door.

The Firehouse Follies show is from 4 p.m. until 6 p.m. at the Waldron Auditorium in Bloomington. Advance tickets are available at https://bctboxoffice.org, and tickets will be available at the door as
well. Proctor and Ossman will interact with two other guest stars: Gary Sandy, a highly experienced actor perhaps best known for his role as the station manager of WKRP in Cincinnati; and Amy Walker, a west coast singer and voice actor known for her ability to provide a voice for every occasion, and with the Follies’ own Unusual Suspects Radio Acting Troupe

Proctor, of Amish and Irish origins, originally hails from Goshen, Indiana, but the group has never performed in the Hoosier state, even though there has been speculation (neither confirmed nor denied) that the town of “Billville,” celebrated in works such as “Boom dot Bust” was in fact based on Bloomington.