(BEDFORD) – Elliott Stone Company donated a monument to honor “Rosie the Riveters” at the rose garden at Pope Pavilion located at 16th and Q streets in Bedford.

The Elliotts were not able to attend the unveiling of the monument. Dave Morthland of Indiana Limestone Institute attended on their behalf.
“We are grateful for this donation the Elliotts have provided,” stated Morthland. “Judy Elliott was a wonderful person and the contribution from Elliott Stone Company to this project is appreciated.” 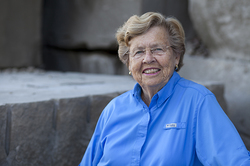 Judy Elliott
Elliott defied stereotypes. She and husband, Dave, founded Elliott Stone Company near Bedford in 1957. When her husband died in 2009, official control of the business was turned over to the couple’s four children, but Elliott remained a visible and active presence. Judy passed away on February 5th of this year, the day after her 87th birthday. 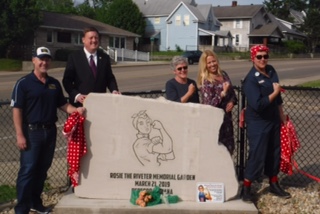 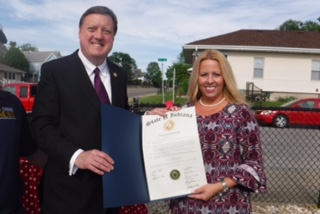 Senator Eric Koch with Bedford Mayor Shawna Girgis with Senate Resolution 64 and sponsored by Rep. Chris May.
A presentation of Indiana Senate Resolution 64 was given to Bedford Mayor Shawna Girgis from Senator Eric Koch and Rep. Chris May during the revealing of the monument.
Timan explained that the purpose of the Rosie the Riveter Memorial Rose Garden is to ensure that the Rosies’ legacy will live on in the young women of today and tomorrow. As a nation-wide initiative, Rosie the Riveter Memorial Rose Gardens are meant to serve as a beautiful reminder of the contributions of women to our country’s success.
Rosie the Riveter is a cultural icon of World War II, representing the women who worked in factories and shipyards during World War II, many of whom produced munitions and war supplies. These women sometimes took entirely new jobs replacing the male workers who joined the military. 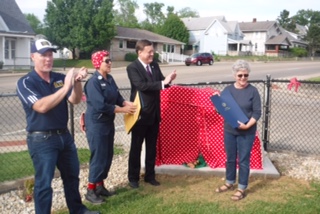 A few “Rosies” mentioned at the unveiling; they included Ana-Mae Hudson, Smokey Cummings, and Judy Heichelbech.
“It is awesome to acknowledge the ladies who supported the war effort, and in support of their men who were at
war, Heichelbech added. ” I just think this is wonderful.”
Heichelbech worked at General Motors from 1977- 2009. 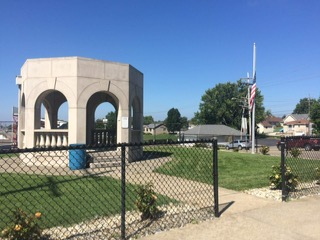 The Pope Pavilion located at 16th and Q streets.
Pope Memorial was the first location in Lawrence County to honor the “Rosie the Riveters: and this is the first monument to be displayed in Indiana honoring “Rosies.” In March 2018, they broke ground to start the memorial.
Pope Pavilion is dedicated to Lt. Harley Halbert Pope 1897-1917. Pope graduated from Bedford High School in 1899. He was a World War I hero and was a namesake of Pope Air Force Base, in North Carolina. 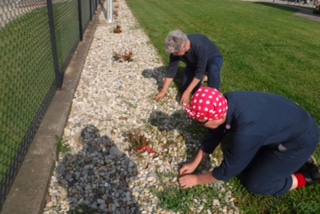 Angie and Judy care for the roses in the garden.
A total of 17 Rosie Gardens are throughout Indiana, and three in Lawrence County. The third was planted this month at the Virgil Grissom Memorial in Mitchell.