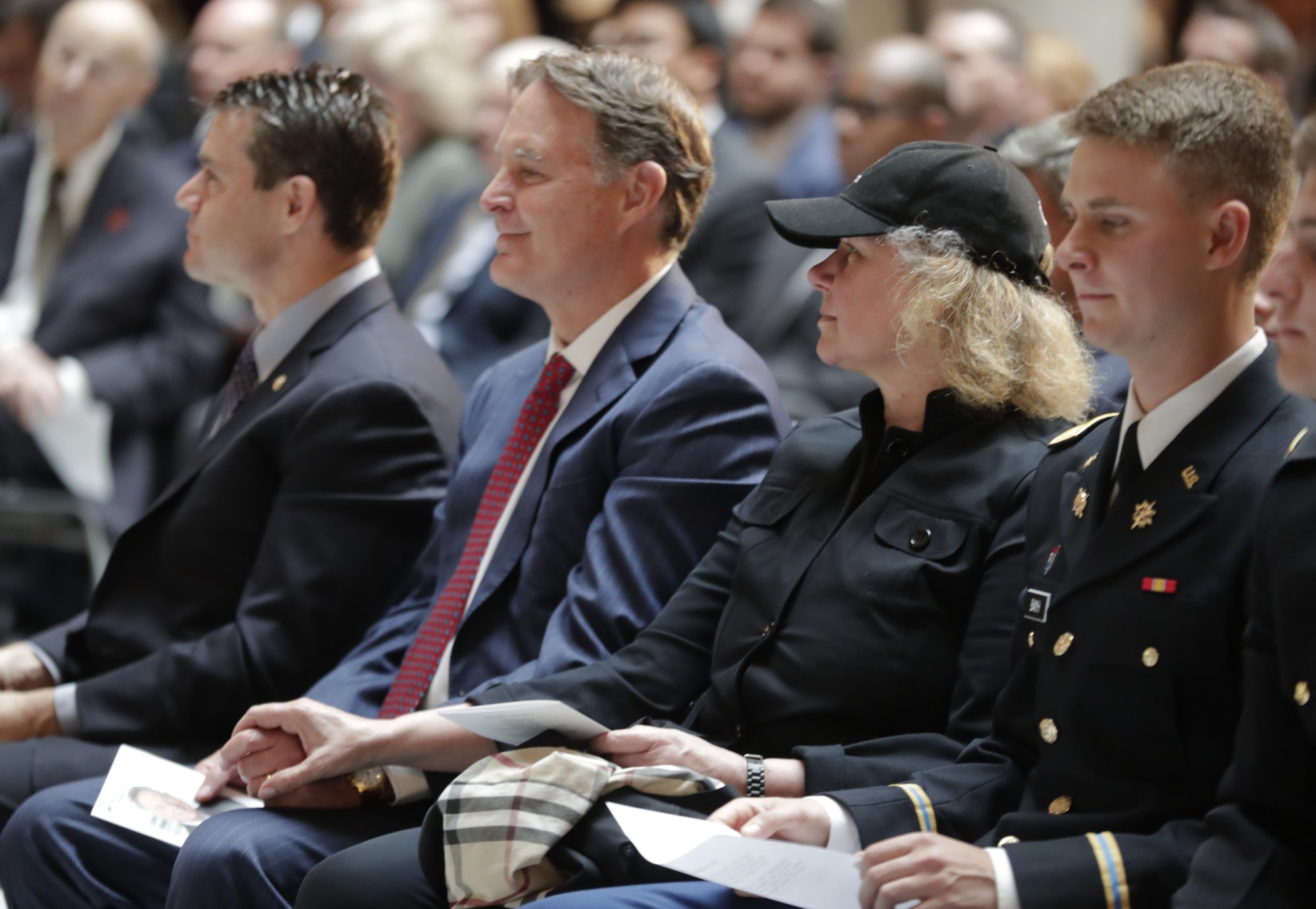 Former Indiana Governor and Sen. Evan Bayh and his wife, Susan, are joined by hundreds of mourners gathered at a memorial service honoring his father, former U.S. Sen. Birch Bayh, at the Indiana Statehouse in Indianapolis, Wednesday, May 1, 2019. Bayh died in March at the age of 91. The Democrat represented Indiana in the Senate for 18 years until he lost his 1980 re-election bid. (AP Photo/Michael Conroy)
Tom Davies, of the Associated Press reports, the legislative legacy forged on Capitol Hill and the jovial hog farmer-turned-politician who won three terms in the Senate were both remembered during an Indiana Statehouse memorial service Wednesday for Bayh, who died in March at age 91.
Scores of Indiana’s government leaders over the past several decades joined a few hundred others in a crowd that filled part of a Statehouse atrium or watch from balconies above. The two-hour service brought together political rivals honoring Bayh, who sponsored the landmark 1972 Title IX anti-discrimination law along with the constitutional amendments lowering the voting age to 18 and allowing the replacement of vice presidents.
Republican former Gov. Mitch Daniels said while he worked on unsuccessful campaigns in 1968 and 1974 against Bayh, he respected the liberal Democrat for his unwillingness to waver from his beliefs in pursuit of votes.
“He was in legislative office, where a person can get by with words, can get by with symbols,” Daniels said. “He was a doer.”
Bayh worked the family’s farm in Shirkieville near Terre Haute before being elected to the state Legislature in 1954 and earning an Indiana University law degree while serving in the Indiana House. He won his first of three narrow elections to the Senate in 1962, serving 18 years until he lost to Dan Quayle during the 1980 Ronald Reagan-led Republican landslide.
Evan Bayh, the late senator’s son who served as Indiana governor and senator, said his father’s compass was to do what was moral and decent.
“He understood that there were worse things than losing an election, one of them is not standing for anything,” Bayh said. “And so he did.”
The service included lighter moments, such as Evan Bayh calling his father an “ice cream-oholic” and telling of their last conversation via Facetime when he asked his father whether he was getting any good ice cream. “He paused and he said, “Well, I’ve never had any bad ice cream.'”
Those at Wednesday’s service also marked a moment of silence for Republican Sen. Richard Lugar, who died Sunday at the age of 87 with a legacy of leading efforts to help the former Soviet states dismantle and secure much of their nuclear arsenal.
Birch Bayh defeated Lugar in a 1974 Senate campaign, but they served in the Senate together after Lugar won a seat two years later. Lugar and Evan Bayh later represented the state together in the Senate for 12 years.
“It’s not very often you can really feel the pages of history turning, you can see the end of an era. But in the passing of my father and the passing of Richard Lugar that is, in fact, what we see,” Evan Bayh said. “We were blessed to have two statesmen of their caliber serving represent our state.”
U.S. District Court Chief Judge Jane Magnus-Stinson said Birch Bayh was dedicated to doing something to fix injustices, such as the obstacles women faced in education. The Title IX law’s passage came at a time when women earned fewer than 10 percent of all medical and law degrees
“My daughters and I and millions upon millions of women and girls are the beneficiaries of Title IX because the doors to higher education were pushed open forever by Senator Bayh’s vision,” Magnus-Stinson said.
The judge, who was a top gubernatorial aide to Evan Bayh, recalled arranging to have Birch Bayh talk with her then-12-year-old daughter as she worked on a school paper about girls in high school sports.
“In one of my conversations with Birch, he said, ‘Jane, these girls today expect to be treated equally,'” she said. “And he added, ‘That was exactly the point.'”