(COLUMBUS) – Silver Alert issued today on Stephanie Ann Hudak has been canceled as of 3:17 p.m. as requested by the investigating agency. 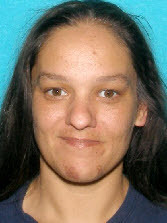 Stephanie is missing from Columbus, Indiana which is 47 miles south of Indianapolis and was last seen on Tuesday, April 23, 2019, at 8:30 p.m. She is believed to be in extreme danger and may require medical assistance.
If you have any information on Stephanie Ann Hudak, contact the Columbus Police Department at 812-379-1689 or 911.