(CRANE). – Crane Army Ammunition Activity constantly strives to protect its people and throughout April, designated as Sexual Assault Awareness and Prevention Month, CAAA focused on educating its people on helping each other via bystander intervention. The month-long SAAPM program is an essential element of the Army’s Sexual Harassment/Assault Response and Prevention initiative.

Crane Army Sexual Assault Response Coordinator Angel Rudd discussed the importance of individual employees standing up for themselves and others in their day-to-day lives. 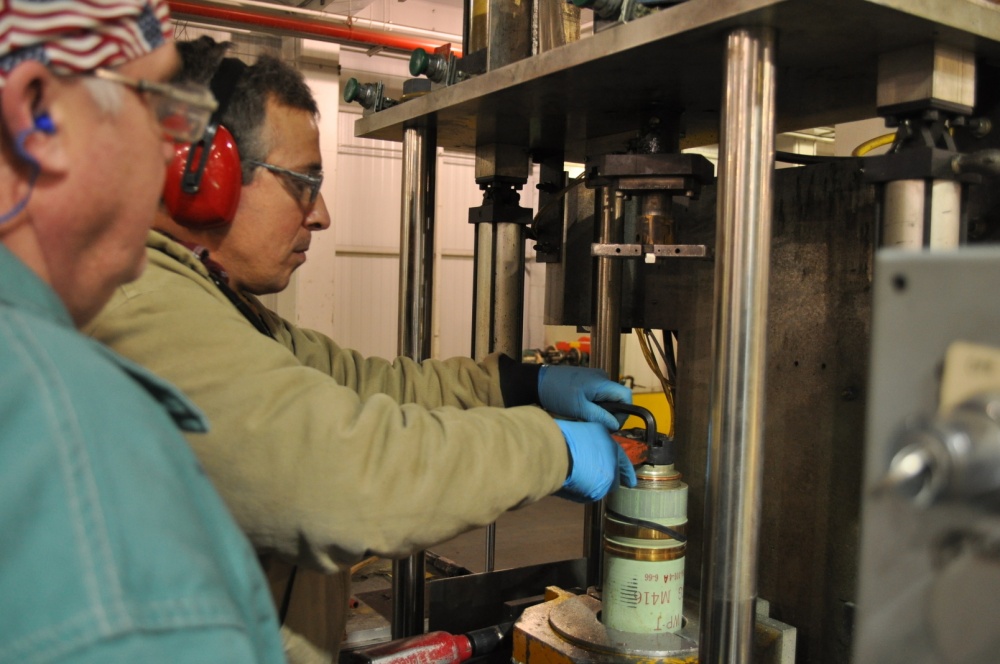 Chaplain (Maj.) Chuck Scott talks about the importance of identifying risk factors associated with suicide prevention during Crane Army Ammunition Activity’s biannual Safety Stand Down. The daylong seminar focuses on the importance of safety and behavior in the workplace (U.S. Army photo by Hayley Smith, Crane Army Ammunition Activity).
“Bystander intervention, or anything someone can do to stop a potentially harmful situation, is a major part of SAAPM and the year-round SHARP program,” Rudd said. “It’s essential for everyone to assume personal responsibility for maintaining a safe and respectful work environment.”
Rudd conducted sexual harassment and assault prevention training for Crane Army employees in March, before the start of SAAPM month. The session involved different kinds of bystander intervention, from asking someone directly to stop making crude or inappropriate jokes to reporting an incident after the fact.
“Discussing different ways someone can stand up for themselves or someone else empowers people to put a stop to inappropriate behavior,” Rudd said. “It also helps hammer home how we’re all responsible for helping to protect each other.”

Angel Rudd, Crane Army Ammunition Activity’s sexual assault response coordinator, discusses the importance of bystander intervention during her training on sexual harassment awareness and prevention. The training is part of a daylong seminar focusing on the importance of safety and behaviors in the workplace (U.S. Army photo by Hayley Smith, Crane Army Ammunition Activity).
Rudd explained how people could encourage the continuation and even escalation of the offensive behavior when they do not step in or say something when that type of behavior occurs.
“By standing by when someone behaves inappropriately you send the message that what’s happening is ok,” Rudd said. “That can lead to more and more of that kind of behavior that could also escalate. There is no such thing as an innocent bystander. You either act, or you support what’s going on.”
Crane Army employees also signed a proclamation vowing to protect themselves and colleagues from sexual harassment and assault and received literature with information on how people can help people in unsafe situations and the phone number for the Crane Hotline, a resource for those who have been harassed or assaulted. Employees were also encouraged to wear teal every Tuesday in April to support sexual assault survivors.
Col. Michael Garlington, commander of Crane Army and the first CAAA employee to sign the SAAPM proclamation, is dedicated to protecting the Army workforce from sexual harassment and assault.
“The safety of the Crane Army workforce is my top priority,” Garlington said. “That includes protecting them from sexual harassment and assault. There is no place for that behavior in the U.S. Army, and there’s no place for it here at Crane.”
Any Crane Army employee who has suffered sexual assault or needs assistance are encouraged to call the Crane Hotline at 812-296-0727.
Crane Army’s mission is to provide conventional munitions support for U.S. Army and Joint Force readiness. It is one of 14 installations of the Joint Munitions Command and one of 23 organic industrial bases under the U.S. Army Materiel Command, which include arsenals, depots, activities and ammunition plants.