(PATRIOT) – A four-month investigation by the Indiana State Police Organized Crime and Corruption Unit ended with the arrest of a Patriot, Indiana man on charges of theft and official misconduct charges related to the theft of money from the Patriot Volunteer Fire Department while he was the fire chief.

The Indiana State Police was contacted in October of 2018 to conduct an investigation after an audit by the Indiana State Board of Accounts discovered that funds were missing from the Patriot Volunteer Fire Department in Switzerland County, Indiana. 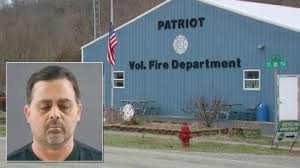