(INDIANAPOLIS) – Indiana Pork recently presented three awards to individuals who have dedicated much time to advancing the pig industry.

Joe Baldwin was the recipient of a Meritorious Service Award. Joe joined Maxwell Farms of Indiana in 2006. As Operations Manager, he oversees all aspects of Maxwell Farm’s wean to finish operation in East Central Indiana with 15,000 sows and contract finishing space to market over 800,000 hogs annually. 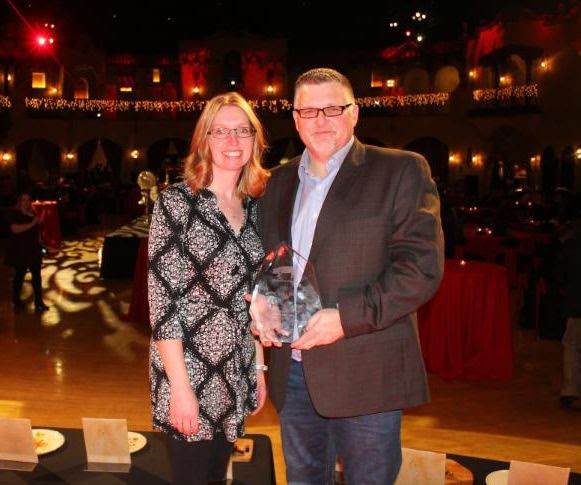 Joe and Stephanie Baldwin
Joe is an Indiana native of Randolph County. He graduated from Purdue University School of Agriculture with a degree in Animal Science.
Prior to joining Maxwell Farms, he held several positions with MBA Poultry in Tecumseh, Nebraska including Live Operations Manager and Processing Plant Manager. He has also held positions with Moark, LLC in shell egg production and he was a production manager for Premium Standard Farms.
Joe is the immediate past president of the Indiana Pork Board of Directors, serves the National Pork Producers Council as a nationally elected member of the Nominating Committee and locally serves as an officer for Randolph County 4H.
Previously, Joe served on the Randolph County Economic Development Board of Directors, Purdue University’s Animal Science Dean’s Advisory Board, the Ohio Poultry Association Board and various local and state animal health committees in Indiana and Ohio.
Joe and his wife Stephanie currently reside near Winchester, IN. They have two boys, ages 9 and 15. Together they own a small sheep and cattle operation on their 115-acre farm.
Indiana Pork awarded its second Meritorious Service award to former Indiana Representative Bill Friend. 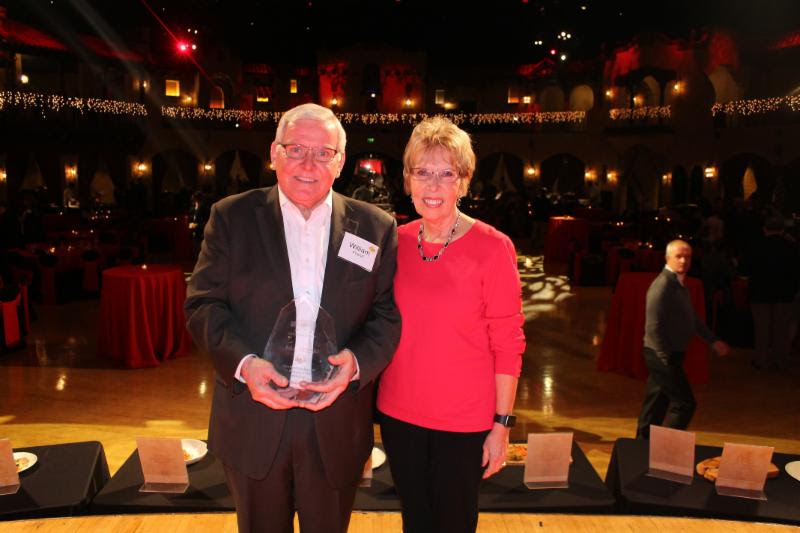 Bill and Ann Friend
State Representative Friend was first elected to House District 23 in 1992. During his tenure at the Statehouse, he served as the ranking member of the House Republican Leadership, Majority Floor Leader and was the Republican Speaker Pro Tempore for the 119th Indiana General Assembly. Throughout his career at the Statehouse, he served on the Agriculture and Rural Development Committee and the Natural Resources Committee.
As owner and operator of Friend Farms and President of Green Acres Ham LLC, Representative Friend is a strong advocate for advancing rural communities across the State of Indiana.
During the 2005 session, Representative Friend authored legislation that collected money from Indiana’s cigarette tax to be dedicated to the Clean Water Fund within the Department of Natural Resources (DNR) budget. The Clean Water program will ensure productivity of Indiana soil and reduce the cost to taxpayers for cleaning ditches and waterways, which will ensure clean drinking water.
Outside of the Statehouse, Representative Friend contributes a significant amount of time to his community. He has served as Miami County Auditor, Vice President of the Miami County Council, Peru-Miami County Economic Development Corporation and the Grissom Redevelopment Authority Treasurer. Representative Friend also attends Mexico Baptist Church, where he has been a Sunday School Teacher for over 25 years.
Representative Friend is a graduate of North Miami High School and the University of Indianapolis. He and his wife, Ann, have three children and two grandchildren.
Jason Oyler of Double J Farms in Carroll County received the Contract Grower award. 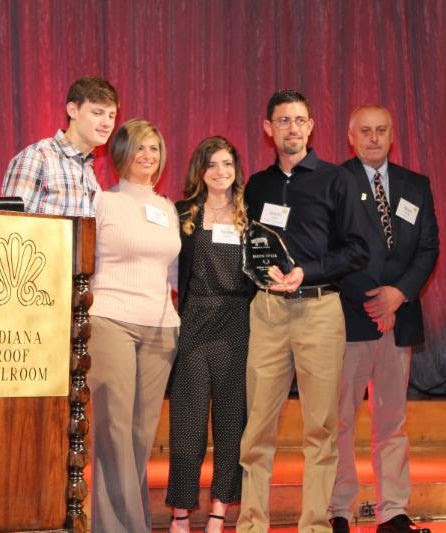 Jason Oyler receives Contract Grower Award
Jason and his father started raising pigs for Co-Alliance/Excel Co-op in 2001. Over the past 18 years he has grown his contract business to 20,000 spaces for Co-Alliance. His farming operation includes many conservation practices and he is currently farming 2,400 acres in the Carroll County area. Jason and his team excel on many different levels, but his key focus is on being a good neighbor and utilizing good environmental practices.
Jason’s barns are all well set back from roads and neighbors. His barns are either screened with a tree barrier or tucked into a woods. His crop ground is 100% no-till and he uses cover crops on all the ground that has manure applied.
Indiana Pork also recognized retiring board member Valerie Duttlinger, Gentryville. Indiana Pork presented her a plaque to thank her for her years of service to Indiana pork farmers.
The board elected Nick Maple, a hog farmer from Amboy, and Brian Martin, a hog farmer from Williamsport, as Indiana Pork President and Vice-President respectively.
Indiana Pork is a not-for-profit association representing Indiana’s 3,000 family pork farmers through the pork checkoff program. Learn more at www.forkmorepork.com