(BLOOMINGTON) – At this evening’s meeting of the Bloomington Common Council, the City of Bloomington Utilities (CBU) is proposing a review of the City’s stormwater fee. The meeting begins at 6:30 p.m. in Council Chambers at City Hall (401 N. Morton St.).

The monthly stormwater fee funds the maintenance and operation of infrastructure that protects surface-water quality in Bloomington and areas downstream and prevents stormwater-related property damage within the City. The fee, which is billed to all City residents, businesses and institutions, has not increased since 2003.
A fee increase would generate an additional $1.8 million annually for the continued maintenance and operation of the City’s stormwater infrastructure and the establishment of a comprehensive effort to implement more environmentally friendly infrastructure improvements on a city-wide basis for the first time. The investment would place Bloomington above the median with regard to stormwater protection among Indiana cities, after historically low levels of stormwater infrastructure investment.
The completion of the Jordan River tunnel tops a list of critical capital projects necessitating additional fees. Although portions of the tunnel were rebuilt in the late 1990s and early 2000s, the segment from the corner of Grant and Kirkwood Streets to First and Washington has not. In early 2017, the portion of the tunnel that lies beneath the intersection at Third and Lincoln was found to be highly degraded. The discovery necessitated an emergency repair that will need to be upgraded within five years.
Of the revenue generated by the fee increase, around $400,000 — an amount representing about one-third of the investment in the major capital projects — is to be dedicated to “green” stormwater infrastructure upgrades in City projects. Green infrastructure elements — such as rain gardens, bioswales, and permeable paving — slow down stormwater flow and reduce the intensity of peak flows and flooding downstream. This approach also removes sediment and other contaminants from runoff using naturally occurring processes, improving water quality in streams. 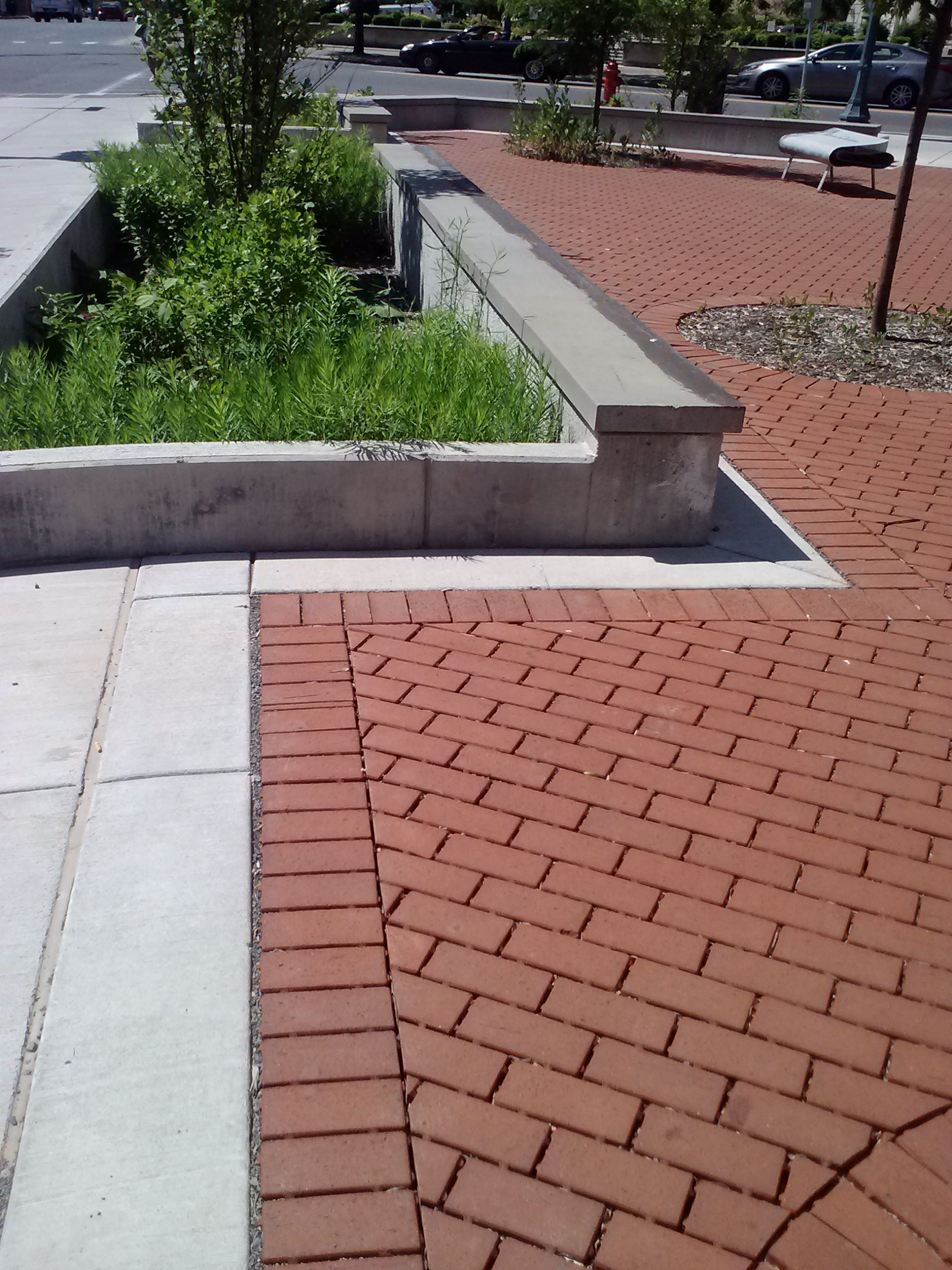 Photo shows an example of green infrastructure from Syracuse, New York. Concrete is partially replaced by permeable pavers and a small detention pond that allows water to enter creeks more slowly to help prevent flooding and offer some pretreatment to improve water quality.
“The City is committed to maintaining our stormwater infrastructure and incorporating green improvements to it to protect our watershed and minimize damage to infrastructure and property caused by increasingly regular major storm events,” said Mayor John Hamilton. “As climate change intensifies weather patterns, this investment is a critical part of serving our residents and meeting our global responsibilities into the future.”
The fee increase will also pay for an expansion of CBU’s neighborhood stormwater infrastructure program, including the new “micro-grants” that offer assistance with improvements in single-family residential properties. Although CBU does not work on private property, this grant could be used toward a resident’s grading, landscaping or permeable pavement project that ultimately helps drainage and stormwater quality for the whole community. CBU may consider extending this program to commercial buildings in the future as well.
CBU began the process of reviewing its stormwater fee in 2018. The proposed rate increase was reviewed and approved by the citizen-run Utilities Service Board. This evening’s first reading of the proposed change before council will be followed by discussion at the February 13 council meeting. The proposal increases the monthly fee for residential customers in two phases: an increase to $4.32 on July 1, 2019, and then to $5.95 on January 1, 2020. Commercial stormwater customers would see an increase that is proportional to the residential increase and also implemented in two stages.
CBU is funded entirely by its customers — the residents, businesses, public institutions and wholesale water companies in and around Bloomington. For the current full schedule of rates, fees, and charges, customers may visit the city’s website at bloomington.in.gov/utilities.