(MITCHELL) – The Harlem Wizards are coming to Mitchell on February 12 thanks to the efforts of Burris Hatfield PTO.

The game will be played in the Mitchell High School gym with doors opening at 6 p.m. with tip-off at 7 p.m.
Advance tickets can be purchased online for $10. If available, tickets will be sold at the door for $12. An online processing fee of $1.25 per ticket will be added to your final total. the online box office for this event closes at 11:59 p.m. the night prior to the game. If you purchase tickets online, you will receive your ticket via email. You MUST print the ticket(s) and bring them to the event. Your ticket will be scanned for entry.
Tickets are also available in both Burris and Hatfield school offices at Orange Leaf and Bedord Ford.
“The funds raised will provide field trips for grades k-5, as well as some of the additional expenses that arise,” says Adrienne Lipp, the Secretary for Burris Hatfield PTO. “Our goal with this event is to raise enough to supply students with school supplies for the upcoming school year.”
What makes a Wizards show “awe-inspiring” or as the kids and teens say, “off the hizzle?” Some say it’s the oohs and aahs created by the thunderous, sky-high slams. For others it’s the humor and seeing the teachers being good sports and having fun on the court with the Wizards. The comedy, the audience participation, the spontaneity delivered as a world class show, in an intimate and community setting adds up to a night to be experienced and treasured. 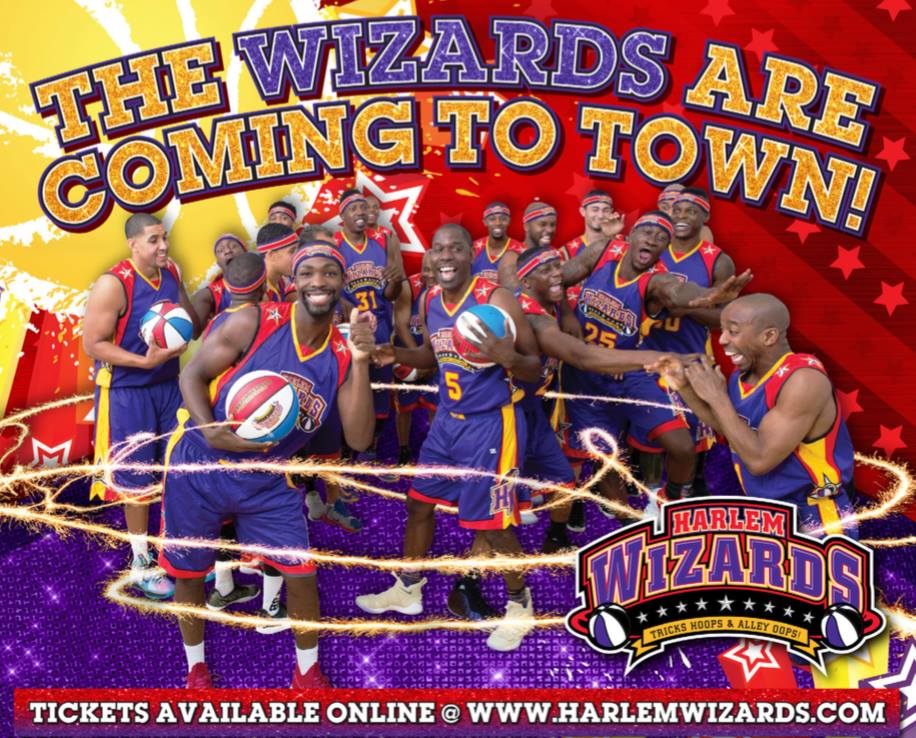 The Wizards roster is full of amazing hoop talent. The Wizards have three units that crisscross the USA, with Eric “Broadway” Jones, and Dwayne “Swoop” Simpson, both former Globetrotter showmen, as well as the dynamic duo of David “DP” Paul and “King Arthur” Lewis a former Academic All-American at Bowie State University.
The star-studded, experienced roster includes Arnold “A-Train” Bernard, an accomplished trickster and a veteran of 7 years with the Globetrotters. Add in James “The Roadrunner” Tyndal who is fast enough to dribble thru New York City traffic, and Devon “Livewire” Curry who led his team to become the FIBA 3 on 3 US championship.
The slams come at rapid fire pace in the Wizards show. The roster features Lemarvon “Showtime” Jackson, the Wizards training camp slam-dunk champion. Add in veteran Leon “Space Jam” Sewell along with rookie sensation Jordan “Flight” Southerland who both competed in the Sprite Slam Dunk contest during the 2015 NBA All-Star week in New York. Roscoe “Sarge” Johnson’s 360 backboard shattering dunk in a Wizards game was shown on ESPN’s dunks of the week online and has had over a hundred thousand views.