(VANDERBURGH) – Washington resident, Earl Martin, was found guilty of the 2017 murder and attempted murder of two men in Vanderburgh County. 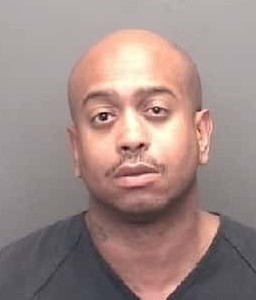 According to court records, a jury found 39-year old Martin guilty on charges of murder, attempted murder, and robbery. He will be sentenced on February 15th.
Evansville police say in December 2017 Martin and co-defendant Jalil Fellows met 20-year-old Christopher Hoefling and another man outside of Rick’s Sports Bar to buy marijuana.
Hoefling was found dead in the passenger seat of a car Dec. 19 after Martin allegedly shot him and driver Brandon Waldroup on Dec. 18, then pulled Waldroup from the car and drove away with Hoefling.
26-year-old Jalil Fellows is also charged with felony murder in Hoefling’s death.
Martin is also awaiting trial for the murder and dismembering of 41-year-old Erica Bradfield, also a former Washington resident, in a separate incident in 2017.
Martin was charged with murder and two counts of obstruction of justice in January after allegedly shooting and killing Bradfield in December.
Martin allegedly told another person he had shot an intruder in the head, then cut apart their body and put it in trash bags so it would be taken to a landfill.
Bradfield died of a single gunshot wound to the head. She and Martin were in a relationship, according to police.
Her body was found in several garbage bags Dec. 22 behind the home Martin and his mother shared on Bellemeade Avenue as well as the one next door.