(SCOTTSBURG) – A Salem man was arrested on meth charges after a traffic stop in Scottsburg.

On Friday night, Indiana State Troopers Kyle Taylor and Tyler Matthew were conducting traffic patrol in Washington and Scott Counties.
At approximately 11:30 p.m., Trooper Taylor observed a black Chevrolet Silverado truck with no light illuminating its license plate while traveling on State Road 56 near I-65 in Scottsburg.
Trooper Taylor then ran the vehicles’ license plate and found that the plate returned to a different vehicle, prompting the trooper to stop the truck. 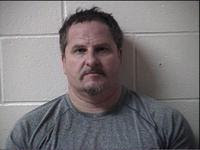 The driver, and sole occupant, of the vehicle, was identified as 48-year-old Shane Ooley of Salem. Ooley was wanted on a warrant out of Clark County on drug charges.
After searching the truck, troopers discovered three ounces of meth and prescription pills.
Ooley was arrested on the Clark County warrant and additional felony charges of dealing meth, possession of meth, possession of a Schedule IV controlled substance, possession of a legend drug, maintaining a common nuisance and a misdemeanor charge of possession of drug paraphernalia.
He was transported and remains in the custody of the Scott County Jail.