(BLOOMINGTON) – IU Surplus is back again with another chance to get one-of-a-kind IU sports memorabilia. The IU Surplus store will be auctioning parts of the old flooring from the Seventh Street IU Fieldhouse that served as the home for the basketball team from 1928 through 1960.

Grace Stryker, of News at IU Bloomington reports, Seattle firm American Portable House Corp. contracted to provide the flooring and bleachers that went inside the fieldhouse in 1928. They shipped from Seattle on Dec. 1 on Union Pacific train car 151223 and took nine days and two hours to arrive — a record time to be installed before the home opener basketball game on Dec. 8. 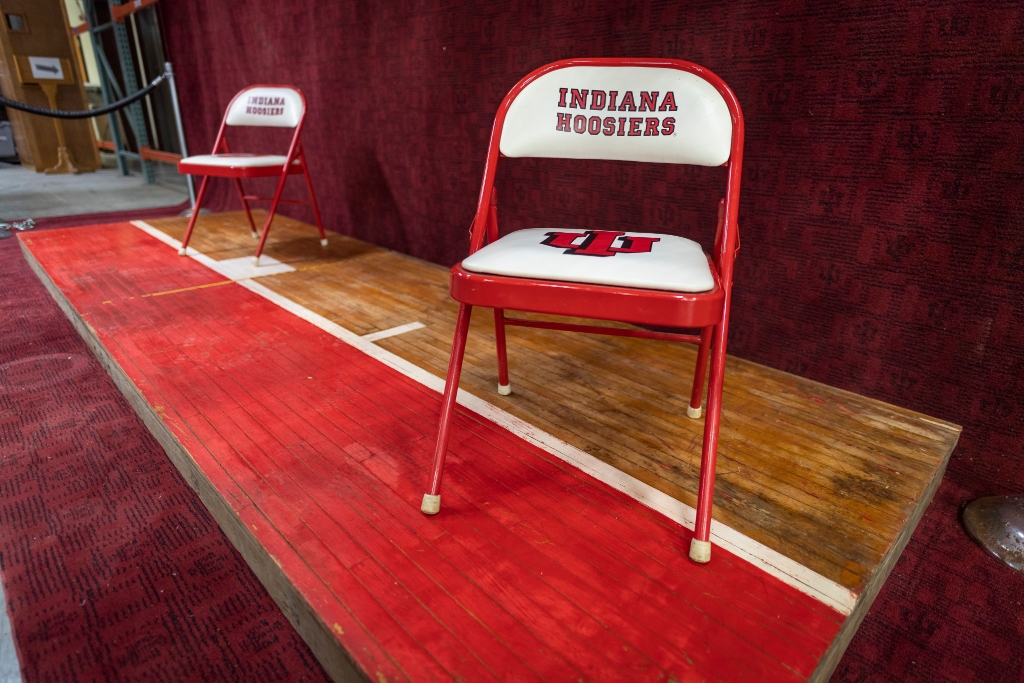 Fans are welcome to visit IU Surplus and see pieces of the floor on display. Photo by Alex Kumar, Indiana University
Among the many special games and players to compete on this floor were the 1940 and 1953 NCAA basketball championship teams.
After the last use of the floor in 1960, it made its way to a new home. The original 140 sections of the flooring were acquired by IU alumna Betty Toombs and were originally intended to line her barn.
In 1996, as IU began to sell plaques containing pieces of the Assembly Hall floor in use from 1976 to 1995, Toombs reached out to inform IU that she had the flooring of the old fieldhouse. She was willing to donate some of it to IU if it would be put to good use.
IU Athletics sold several thousand plaques from sections of the floor. The remaining 86 sections of the flooring were being stored in a Martinsville warehouse that the Toomb family owned.
Once Toomb’s warehouse was taken over by Structural Components Fabrication company, IU Surplus manager Todd Reid was informed that IU Athletics would get the rest of the flooring as a donation. With the help of IU alumnus and artifact specialist Chris Williams, who spends his free time researching IU sports memorabilia, the flooring was authenticated.
“Once we knew that we had the flooring, we had to decide on a strategic plan of what to do with it,” Reid said. “We knew we wanted to get it back out into the Hoosier nation.”
Reid and his surplus team are now going through the 86 pieces and deciding which ones are in valuable condition. He believes about 60 to 70 percent of the pieces are in decent condition to be sold.
These pieces will be sold through a number of outlets. Reid said that numerous pieces will be available on the sports memorabilia site Fanatics.com. Another chunk of the flooring will be used to make plaques celebrating the IU Bicentennial.
Fans can follow the IU Surplus social media accounts to learn more about the flooring and the timing of any auctions later in the year. Pieces will go from around $1,500 to $2,000.
Fans are welcome to visit IU Surplus and visit the display piece.
“We are going to try to sell locally,” Reid said. “We would love to see it in IU sports bars around the Bloomington community.”
Information – News at IU Bloomington, https://news.iu.edu