(BEDFORD) – A Williams man was arrested on Friday after police say he hit and injured a 3-year-old girl. 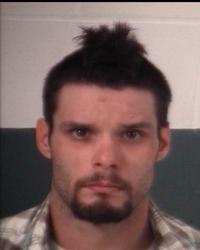 Lawrence County Police arrested 29-year-old Travis Cain on two felony counts of domestic battery resulting in bodily injury to a person younger than 14, a felony count of neglect of a dependent resulting in bodily injury.
According to a Lawrence County Superior Court I probable cause affidavit, a Lawrence County Police detective was called to IU Health Hospital on Oct. 10 after the staff reported treating a toddler that had “extensive and severe bruising” on her body.
A Department of Child Services worker told the detective a woman had brought her niece to the hospital after noticing the injuries and feared the child had been beaten by Cain, the toddler’s father.
The aunt told police Cain had violent outbursts.
Detectives talked to Cain on Oct. 5. Cain told police he was aware the child had bruises but didn’t know how she got them saying his daughter was clumsy and may have got them while carrying a piece of wood. Then in another statement accused another person of causing the injuries.
He did admit he had an anger problem but denied causing the injuries.
The aunt told police she had dropped the girl off at Cain’s home on Sept. 28 and two days later, Cain brought the child back to her and that is when she noticed the injuries. The aunt then informed the mother who said she would have something done about it, but never did.
The mother during a police interview did admit she knew about the injuries but didn’t do anything about it.
Cain was arrested on a warrant and is being held in the Lawrence County Jail on a $2,005 cash bond or $20,000 surety.