(SALEM) – A Salem man was arrested last Thursday after police say he hit and choked his wife during a domestic dispute. 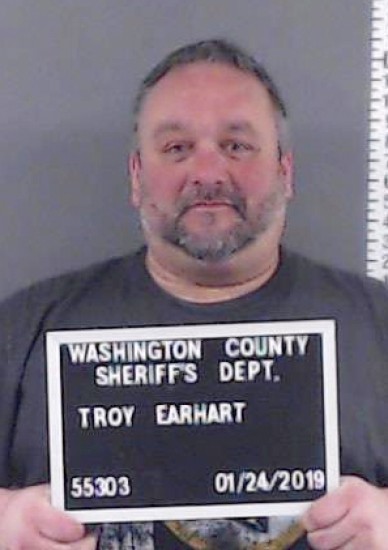 Police arrested 41-year-old Troy Earhart, on charges of domestic battery and strangulation.
Indiana State Police were alerted after Adult Protective Services agent learned Earhart was possibly both mentally and physically abusing his wife.
Both an ISP detective and a caseworker went to the Earhart home to investigate the incident.
The wife told police she was a victim of domestic abuse for more than a decade. She told police that on Friday, Jan. 18, she and Earhart had gotten into an argument and he grabbed her by the shoulders and attempted to shove her through a doorway. He also slapped her and then choked her using both hands. She tried to fight back by head-butting him.
Police say the woman still had bruises on her face and had photos on her phone of her other injuries.
Earhart admitted to police he did shoved and slapped his wife but didn’t choked her until after she had headbutted him.
The trooper noted in his report that Earhart is 6 feet tall and 265 pounds, while his wife is 5-foot-3 and only 150 pounds.
Earhart was arrested and charged with strangulation and domestic battery. He posted a $5,000 bond and was released from jail.