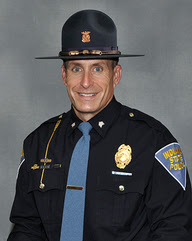 Huls
Huls was the successful candidate of a promotion process that included a written test, an oral interview and a culmination of seniority, education and overall job performance. The Sellersburg District is made up of Washington, Scott, Harrison, Floyd and Clark Counties. Sergeant Huls’ predecessor, Sergeant Jerry Goodin, recently retired from the state police to serve as the Sheriff of Scott County.
Carey Huls is a native of Salem Indiana and a 1984 graduate of Indiana University where he received a Bachelor’s Degree in Criminal Justice in 1995. Prior to college Huls served our country in the United States Navy from 1985 until 1991. After his service to the Navy, Huls enlisted with the Indiana Army National Guard where he served as an Infantry Squad Sergeant from 1992 until 1996.
Upon graduation from the Indiana State Police Recruit Academy in June of 1995, Huls was assigned to the Seymour District where he primarily patrolled Jackson County. In 2003 he transferred to the Sellersburg Post where he patrolled until his promotion to Corporal in 2008. After serving as a district duty officer for nine years, Huls was promoted to the position of Squad Sergeant where he supervised a group of troopers assigned to the district’s special criminal enforcement squad. During his time on the department, Huls also served as a firearms instructor.
Sergeant Huls’ new duties will include the coordination of public education programs and to serve as the Department’s news media liaison on public safety, crime prevention, and law enforcement public interest issues. He will also be available to present public safety and informational programs to community and service organizations.
Sergeant Carey Huls has been married to his wife Jessica for 24 years and they have five children.