(BLOOMINGTON) – A study from Indiana University has found that trees influence whether soil can remove or emit gases that cause smog, acid rain, and respiratory problems. 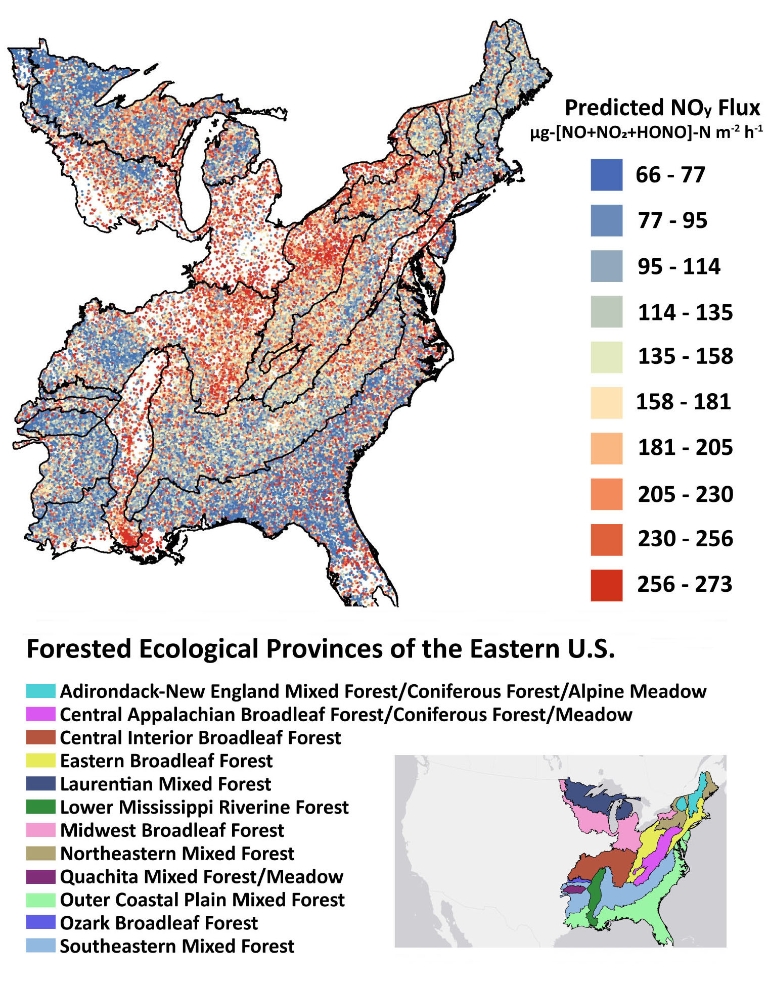 IU scientists predict higher levels of harmful reactive nitrogen oxides in the Midwest, Mississippi River corridor and the eastern United States (in red) based on the location of forests whose trees enhance the activity of soil bacteria that release these chemicals. Image courtesy of Ryan Mushinski, IU School of Public and Environmental Affairs
The chemicals, collectively known as reactive nitrogen oxides, are produced by soil bacteria that feed on naturally occurring ammonium — as well as nitrogen fertilizers from industrial and agricultural sources that enter soil from the atmosphere.
The study was reported Jan. 18 in the Proceedings of the National Academy of Sciences.
“This study has profound implications for future air quality,” said Jonathan Raff, associate professor in the School of Public and Environmental Affairs at IU Bloomington. “Human activities, such as fire suppression, ferti, izer use and climate change, are causing forest populations to shift from stands of trees whose soils do not emit these gases to those that do.
“Reactive nitrogen oxide gases from fossil fuel burning have been well curbed over the past several decades due to effective policy,” he added. “However, our study shows that, as forests change, we can expect higher background levels of nitrogen oxides, which could make it more difficult for some regions to achieve the National Ambient Air Quality Standards for nitrogen oxides and ozone.”
Raff’s laboratory is one of the few university-based facilities in the country able to accurately measure reactive nitrogen oxides emitted from soil. The gases include nitric oxide, nitrogen dioxide and nitrous acid.
“In forests, these gases are really under the radar, partly because they’re so difficult to detect,” said Ryan Mushinski, a postdoctoral researcher at IU who led the study. “A lot of people also simply don’t think about soil as a significant producer of harmful air chemicals.” 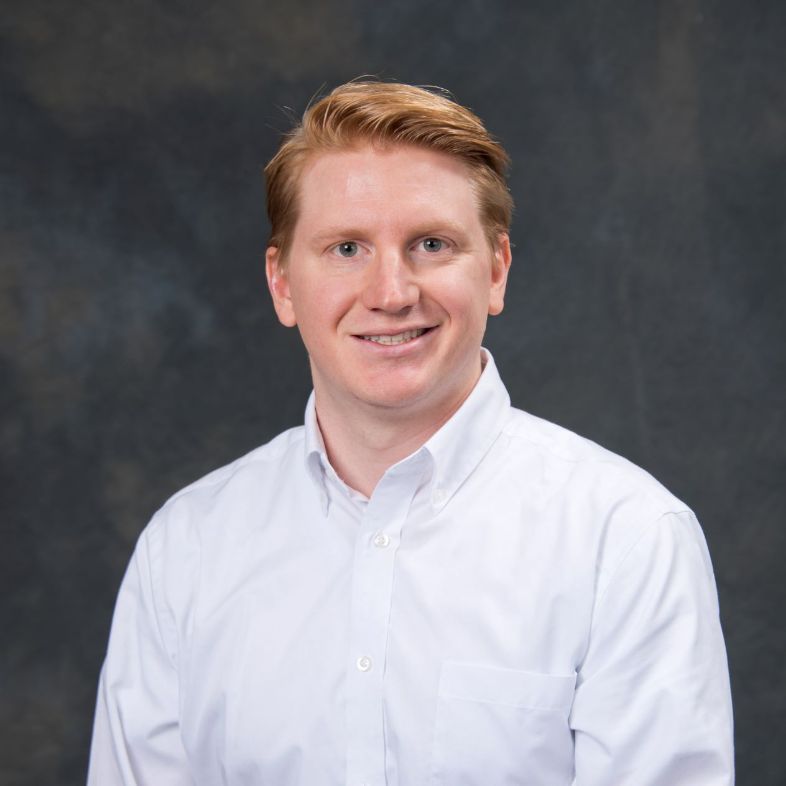 Ryan Mushinski. Photo by Kendall Reeves, IU School of Public and Environmental Affairs
Although it’s known that certain types of ammonia-oxidizing bacteria can emit reactive nitrogen from the soil, researchers at IU discovered that trees can be divided into two groups: those that enhance nitrogen oxide-releasing bacteria activity, and those that don’t.
Tree species that promote the release of nitrogen oxides include maple, sassafras and tulip poplar. The growth of these trees pushes out other species, such as oak, beech and hickory, whose associated microbes absorb reactive nitrogen oxides rather than release them.
The study, which is the first to identify forested regions in the U.S. that emit reactive nitrogen oxides based upon soil types, was facilitated by a review of soil data from 78,000 forest plots across the country from the USDA Forest Service Forest Inventory and Analysis Program. The analysis was made possible in part due to work led by Richard Phillips, an associate professor in the IU Bloomington College of Arts and Sciences’ Department of Biology, who is a co-author on the study. Phillips has pioneered research that connects specific tree species with specific soil types based upon their underground fungal networks.
Indiana, Illinois, Michigan, Kentucky, and Ohio are the states expected to have the highest emissions of nitrogen oxides from forest soil, according to the new study. Higher emissions are also expected from forests along the Mississippi River and some regions of the eastern U.S.
Nitrogen oxide concentrations are regulated under the Clean Air Act, and the EPA regularly monitors their levels. But Mushinski said current rules are not enough to curtail rises in soil emissions, since air quality standards do not regulate fertilizer use or nitrogen deposition. 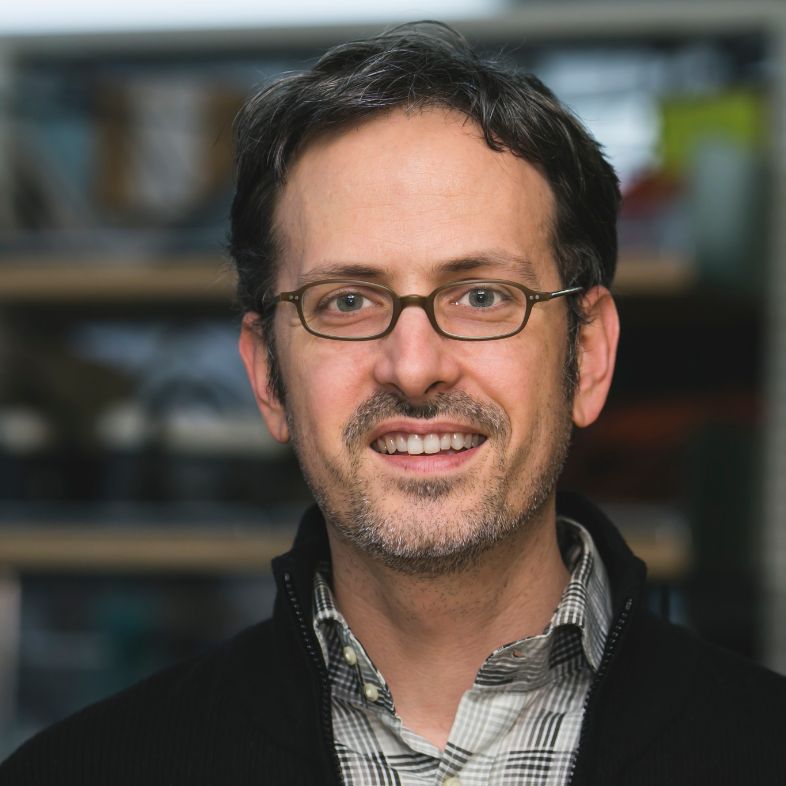 Jonathan Raff. Photo by Chaz Mottinger, Indiana University
In addition to pollution regulation, he suggests that revised land management policies permitting greater use of controlled burns could slow the gradual change in forest composition. These fires are an effective way to clear out tree species that promote the soil that emits reactive nitrogen gases.
“It’s difficult because people really like trees such as maples and poplars,” he said. “But without greater awareness or policy changes, we’re not going to see a reduction in the harmful gases they encourage.”
This work relates to Prepared for Environmental Change, the second of Indiana University’s Grand Challenges initiatives, which brings together a broad, bipartisan coalition of government, business, nonprofit and community leaders to help Indiana better prepare for the challenges that environmental change brings to the state’s economy, health and livelihood.
Additional IU Bloomington authors on the study are professor Jeffrey R. White and postdoctoral researcher Rebecca B. Abney in the IU School of Public and Environmental Affairs; Douglas B. Rusch, an assistant research scientist in the Department of Biology; and Zachary C. Payne, a graduate student in Department of Chemistry. Other authors are Insu Jo and Songlin Fei at Purdue University and Salley E. Pusede at the University of Virginia. Mushinski, Raff and White are also affiliated with the Integrated Program in the Environment at IU. Raff is the principal investigator on the study.
This work was supported in part by the U.S. Department of Energy and the National Science Foundation.
Information IU News Bloomington, https://news.iu.edu