(BEDFORD) – A Bedford man was arrested Saturday after injuring a woman and spitting on Bedford Police officers. 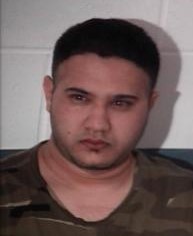 Police arrested 25-year-old Hardeep Singh pf Bedford on felony charges of domestic battery in the presence of a minor, battery by bodily waste on a police officer and battery on an officer. He is also facing misdemeanor charges of resisting arrest and disorderly conduct.
Bedford officers responded to the 300 block of O Street at 7:30 p.m. after a report of an accident.
According to Bedford Police Chief Terry Moore, when officers arrived they noticed a door open to a house across the street from the accident. When they approached the home, they found Singh inside.
Singh admitted that he had crashed his vehicle into the pole across the street from the home.
There was a woman also inside the home who had suffered visible injuries. When asked how she was injured, she told police that she and Singh had been arguing and he had grabbed her by the arm, causing a laceration.
Singh was arrested and transported to the Bedford Police Department where he became violent with officers verbally and physically, kicking and spitting at them.
Singh then appeared to have a medical issue and was released from his handcuffs and became violent again.
He was again placed in handcuffs and continued to be abusive, kicking, yelling and spitting at officers.
He was transported by ambulance to a local hospital for a medical evaluation. After Singh was cleared by hospital staff and taken to jail. He was released Monday after posting a $755 cash bond.