Hall-of-Famer and West Baden Springs native Larry Bird was on hand, as were many of his teammates from the memorable ’78-’79 season.
Forty years ago, the Indiana State team thrilled fans with an undefeated regular season, and its only appearance in the NCAA championship game, the first mid-major basketball team to do so. 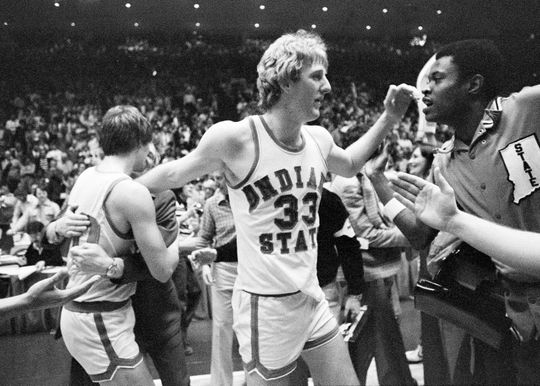 Indiana State star Larry Bird makes his way through the crowd of players and fans getting congratulations after his team defeated Arkansas, 73-71, to win the NCAA Midwest Regional tourney crown in Cincinnati, March 17, 1979. (Photo: BH, Associated Press)
Indiana State was remembering the 40th anniversary of Bird facing off with Magic Johnson and Michigan State in the championship game. Bird, who averaged 28.6 points in being named the NCAA player of the year, and second-leading scorer Carl Nicks, 19.3 points, were honored midcourt as well as coach Bill Hodges.
For the first time in more than 13 years, the Hulman Center sold out its 10,200 seats to fans who wanted to be a part of the celebration.
In a special section at one end of Hulman Center, men in their 60s shared old stories, recalling the tumult of 40 years ago. That’s when they shocked the basketball world by coming within one night of a perfect season, and a national championship game transformed into three unforgettable words — Bird vs. Magic.
The Final Four has never been the same. The Spartans’ 75-64 win in an epic first showdown between two giants — Johnson had 24 points, Bird 19 and 13 rebounds — was the highest rated TV college basketball game ever. It still is. Given the modern proliferation of broadcast outlets to divide the audience, it likely always will be. 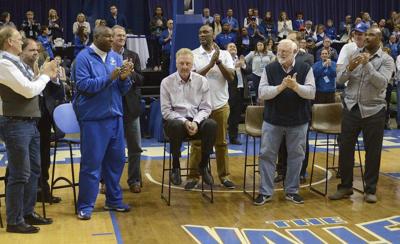 Tribune-Star/Joseph C. Garza
As Bird took the microphone to thank his teammates at the post-game celebration everyone in the stadium rose to their feet paying tribute.