(BROWNSTOWN) – The Jackson County Commissioners hired a Florida-based law firm to represent the county in a lawsuit over whether a Nativity scene can be placed on the courthouse lawn.

The commissioners hired representation after an attorney for the Madison, Wisconsin-based Freedom From Religion Foundation said in a letter to Jackson County’s commissioners that a “concerned local citizen” contacted the group about the lighted display outside the courthouse in Brownstown. 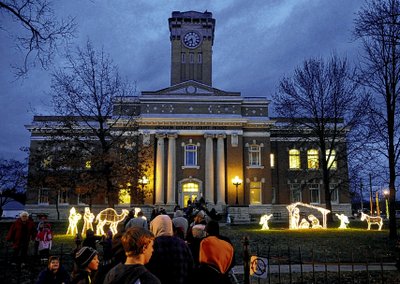 Nativity scene at Jackson County Courthouse
That concerned citizen, Rebecca Woodring, filed a federal lawsuit on Dec. 28, saying the Nativity scene endorses religion and asking the county not to display the Nativity scene during holidays in the coming years. Woodring is represented by Indianapolis attorney Kenneth Falk of the ACLU of Indiana.
According to court documents, Woodring contends she drives by the courthouse multiple times each week and is “forced to come into direct and unwelcome contact with the Nativity scene there” when it is displayed, which has caused her “irreparable harm.” Falk wrote the display lacks a secular purpose and endorses the Christian faith.
Liberty Counsel agreed to provide legal services to the county for free, according to the contract approved by commissioners. It also stipulates that if the county wins the lawsuit and fees are collected, the total would go to the organization.
Information Seymour Tribune, http://www.tribtown.com