(CRANE) – A Naval Surface Warfare Center, Crane Division (NSWC Crane) employee was awarded one of the highest civilian honors for an act of bravery overseas. William (Bill) Taylor, an AC-130W Weapons Specialist at NSWC Crane, received the Command Civilian Service Medal for Valor and Courage in a combat zone for saving seven lives and extinguishing a fire. 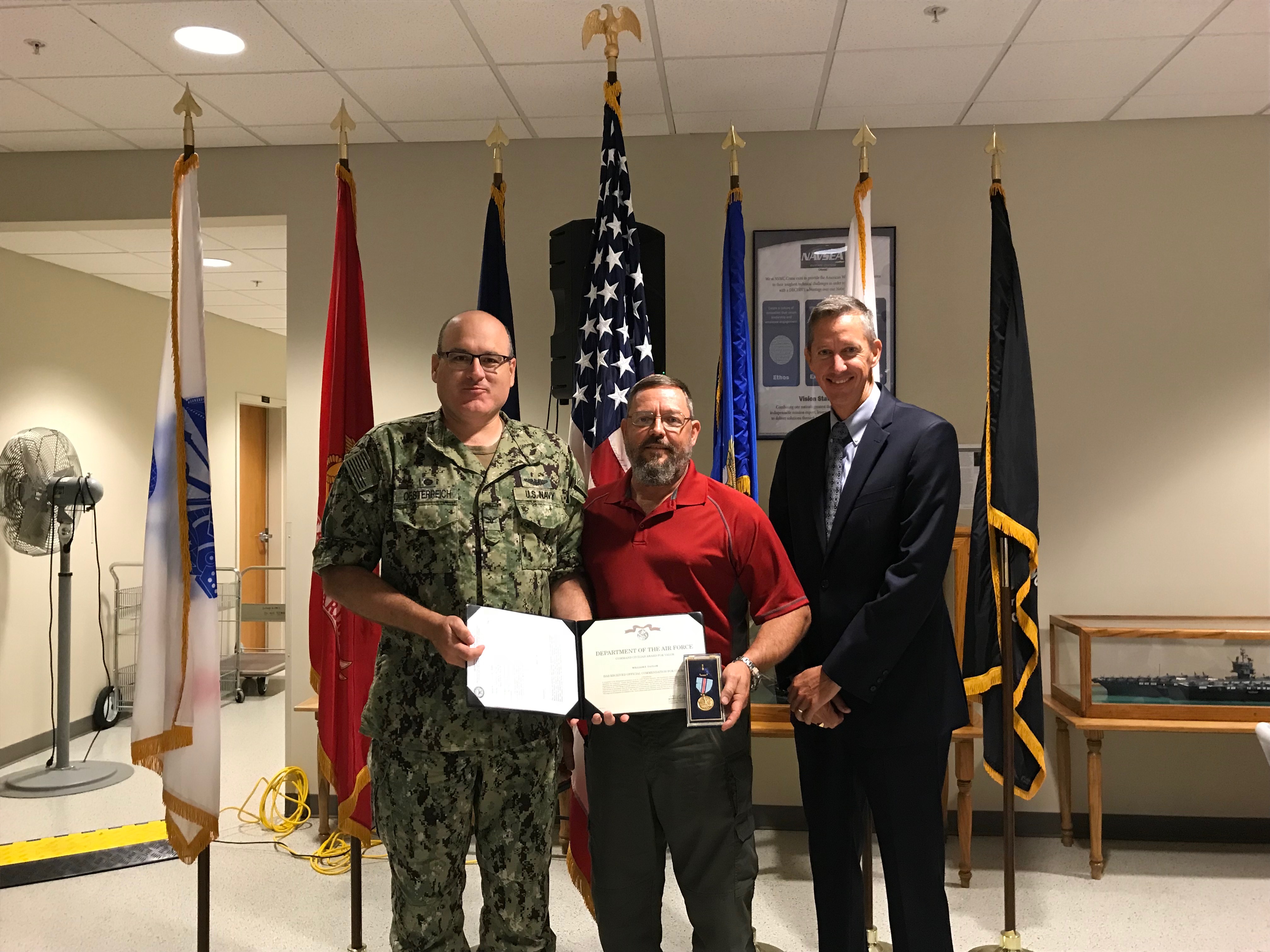 From left to right: Capt. Mark Oesterreich, NSWC Crane Commanding Officer, Bill Taylor, and Dr. Brett Seidle, NSWC Crane Technical Director.
The AC-130W Stinger II is a United States Air Force (USAF) aerial gunship that supports special operations forces in war zones. As a Crane employee, Taylor is currently supporting Combined Joint Task Force – Operation Inherent Resolve (CJTF-OIR). In conjunction with partner forces, CJTF-OIR defeats ISIS in designated areas of Iraq and Syria and sets conditions for follow-on operations to increase regional stability.
Taylor was recognized for his “outstanding performance, professional competence, and ceaseless efforts in the identification and elimination of a fire inside an AC-130W Stinger II aircraft valued at $193 million. His deft action and 20 years of previous maintenance experience as a Crew Chief led him to immediately clear the surrounding area of personnel and equipment while simultaneously extinguishing the fire and alerting the Fire Department to respond to the emergency.”
Taylor’s “expedient actions ultimately saved the lives of seven maintenance and flight crew personnel. This single act of compassion for mankind.reflects credit upon himself and the United States Air Force.”
Taylor says it is an honor to be distinguished for his actions.
“I’m just glad I had the confidence, training, and the courage to step up during an emergency situation,” says Taylor. “I’m humbled to be acknowledged with an award of this magnitude, but at the same time, proud to be working alongside the finest group of heroes this nation could ever ask for in a combat zone. I also understand that none of this could be possible without the hard work, dedication, and support from the coworkers, family, and friends that are back home supporting the warfighter.”
Currently, on his eighth combat tour, Taylor says it isn’t easy being away from home.
“Being away from loved ones, especially during the holidays, is difficult, but I know I’m doing a job that is necessary and vital to our nation’s security. It is quite gratifying to know that I’m working on the number one most feared weapon of our enemy.”
This year, Taylor has 30 years of combined active duty and civilian experience working on the AC-130 gunships.
“That’s more time than most of these warfighters have been alive,” says Taylor. “I’m honored to be able to pass on some of my knowledge, expertise, and the occasional ‘I was there’ war story.”
Taylor is a lifetime member of the American Legion Post 250 in Mitchell, Indiana.
NSWC Crane is a naval laboratory and a field activity of Naval Sea Systems Command (NAVSEA) with mission areas in Expeditionary Warfare, Strategic Missions and Electronic Warfare. The warfare center is responsible for multi-domain, multi- spectral, full life cycle support of technologies and systems enhancing capability to today’s Warfighter.