The chain said on Thursday that it will test out a vegetarian menu board in some restaurants in coming months. Taco Bell will unveil limited-time vegetarian and vegan items as part of the test. It will also highlight the restaurant’s current vegetarian options, including tacos, tostadas burritos, and crunchwraps. 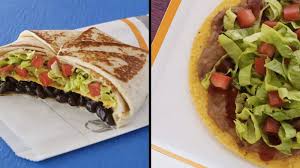 Putting all of the meat-free items on one menu should make it easier for vegetarians to see their options, Taco Bell explained.
Taco Bell already helps vegetarian and vegan customers avoid animal products. A “Make it Meatless” feature on the taco chain’s app and website shows people how to customize their orders to exclude meat or dairy. And since 2015, Taco Bell has been offering options that are certified vegetarian by the American Vegetarian Association. This is the first time that the company will have the vegetarian menu highlighted in stores.
“We’ve always been a safe haven for vegetarians because we already have so many options,” said Elizabeth Matthews, Taco Bell’s chief food Innovation officer. “Many people just don’t know it.”
By highlighting lighter offerings, quick-service and fast casual restaurants can help make sure they don’t lose people vowing to stick to a healthier diet in the first few months of the year, said Morningstar analyst R.J. Hottovy. It could also be a way to find out if customers are seeking more plant-based options, he said.
Other companies are trying to capitalize on diet-based resolutions, Hottovy noted. Chipotle (CMG) recently launched “lifestyle bowls,” a new collection of meals that fit into paleo, ketogenic and Whole30 diets.
Matthews said that the move represents Taco Bell’s commitment to highlighting it’s vegan and vegetarian offerings. “It’s kind of fun to make the announcement at the beginning of the year”, said Matthews. But “we don’t view it as a resolution,” she said.
Information CNN, https://www.cnn.com