(INDIANAPOLIS) – The mother of three children fatally struck while crossing a northern Indiana highway to board their school bus supports legislation for tougher penalties against drivers who pass buses with extended stop arms.

Tom Davies of the Associated Press reports, Brittany Ingle, her husband, and father joined lawmakers at a Statehouse news conference Tuesday announcing bills aimed at improving bus safety with steps such as prohibiting stops at locations where children would have to cross highways and requiring annual route safety reviews by school districts. 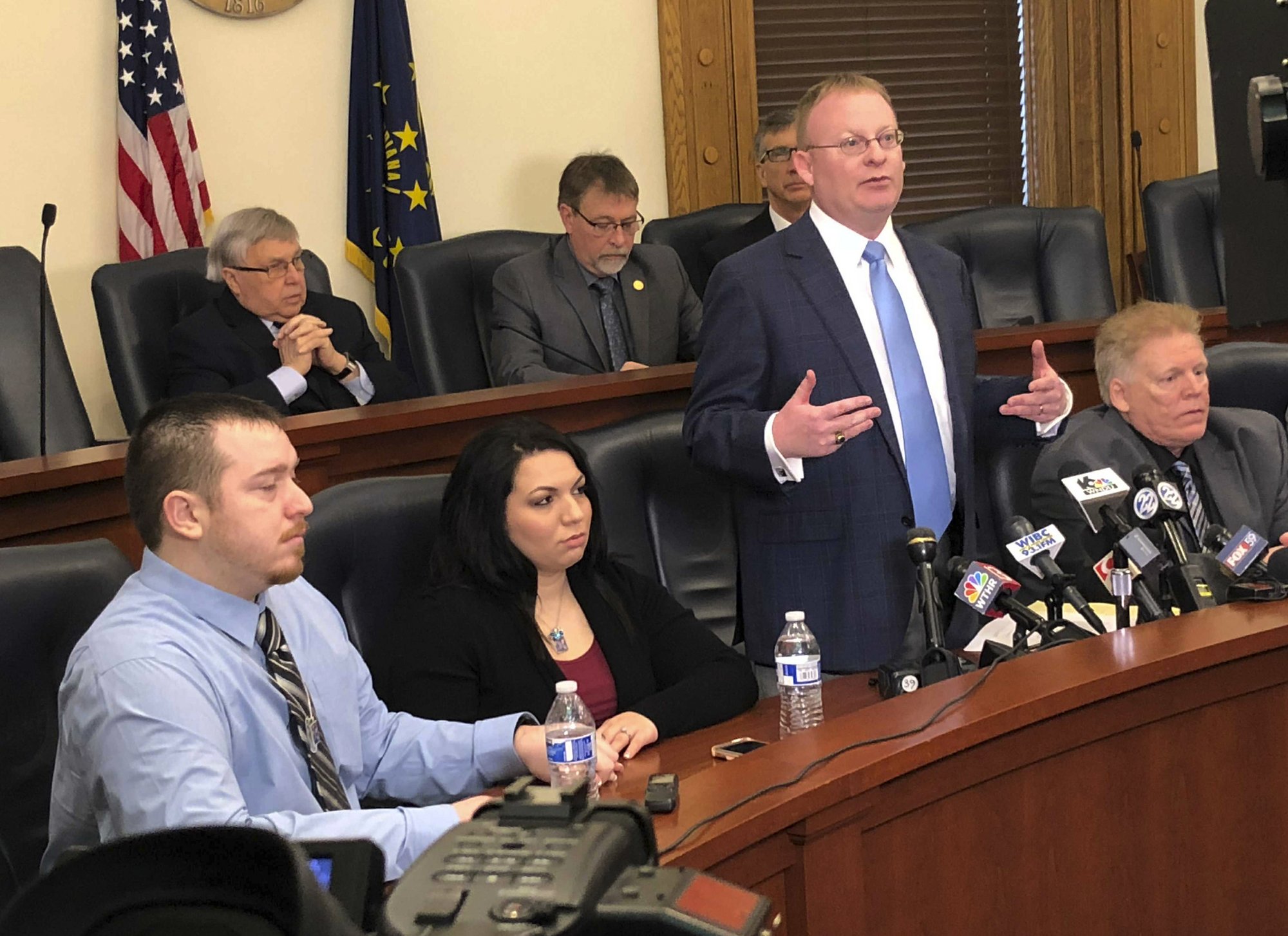 Brittany and Shane Ingle, left, listens as State Senator Randy Head, R-Logansport, speaks at news conference at Indiana Statehouse Tuesday.
Ingle’s 9-year-old daughter, Alivia Stahl, and twin 6-year-old sons, Xzavier and Mason Ingle, were killed in the Oct. 30 pre-dawn collision on Indiana 25 near Rochester. The driver who hit the children told authorities she didn’t realize she was approaching a stopped school bus, despite the activated stop arm and flashing lights, until the children were right in front of her. She’s pleaded not guilty to three counts of reckless homicide.
Brittany and Shane Ingle said they did all they could to teach the children about safely crossing the road from their neighborhood to the bus stop and hope that their tragedy leads to greater protections for other children.
“I’m just going to fight so no parent has to go through this,” Brittany Ingle said.
A bill sponsored by Republican Sen. Randy Head of Logansport proposes suspending the driver’s license for 90 days the first time someone passes a stopped school bus and a year for repeat offenders. It would raise the offense of not stopping for a school bus from a ticketed infraction to a misdemeanor and make it a felony offense to recklessly pass a bus and injure someone.
Head said another suggestion being considered is adding cameras to the bus stop arms to take photographs of violating vehicles.
“We want to provide law enforcement with more evidence so we can get more prosecutions and let people know that if they think they are going to save 10 seconds, 30 seconds, or whatever, to get where they are going that it’s going to end up costing them a lot more than that if they break the law,” Head said.
Legislative committee hearings haven’t yet been set on the bills, but the family said not stopping for school buses should be an offense comparable to drunken driving.
“We’ve been really lucky that we haven’t had more fatalities,” said the children’s grandfather, Michael Schwab. “We can’t depend on luck anymore.”