(COLUMBUS) – A Columbus teen was seriously injured in a two-vehicle crash Sunday night in Bartholomew County. 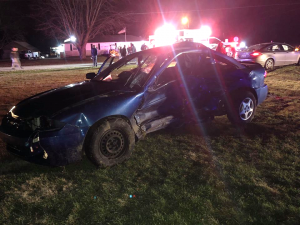 Courtesy Bartholomew County Sheriff’s Department
At approximately 6:30 p.m., Bartholomew County deputies responded to the crash at the intersection of East County Road 100 South and South County Road 650 East.
The driver, 19-year-old Philip Artis, was flown to IU Health Methodist Hospital in Indianapolis. His condition is unknown at this time.
The driver of the second vehicle, 33-year-old Aaron Klene, of North Vernon, was not injured.
A witness told deputies that Artis was traveling southbound on County Road 650 East when he failed to stop at the intersection. The witness stated Klene tried to avoid the collision but was unable to.