Having originated in ancient Rome as a way of recognizing a particularly valued member of the community, the honor has been locally revived on the occasion of the Bicentennial to recognize Cook for her “exceptional service promoting, protecting and preserving the City of Bloomington.” 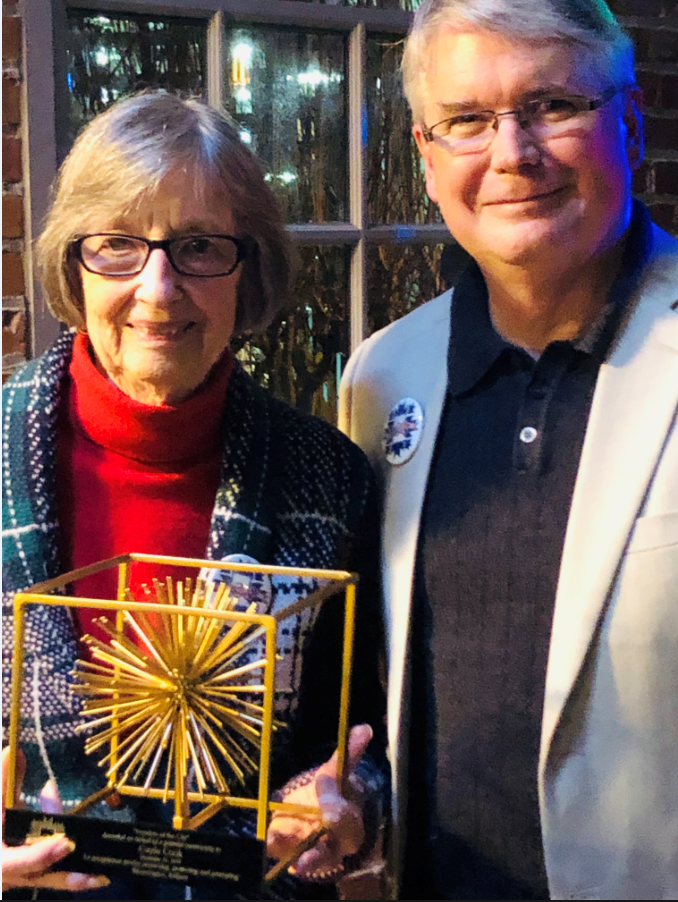 Co-founder with her late husband Bill Cook of the medical equipment manufacturing firm Cook Incorporated, Mrs. Cook has made an immeasurable contribution to the community’s economic vigor and the preservation of its history, Hamilton said. In his remarks during the award presentation, Hamilton commented that Mrs. Cook had “helped establish Bloomington as a center of the global biomedical industry, and dedicated herself to the ever-changing vitality of our city.”
In addition to the active role she has played over more than five decades within the company, Mrs. Cook has been personally involved in the preservation of many historic structures across Southern Indiana, and especially in Bloomington. Along with the Monroe County Courthouse, the Cooks have partnered to restore structures including the Graham Hotel, the Curry Building and the former Showers factory building that houses City Hall. In September 2018, Mrs. Cook was recognized for having played a leading role in the preservation of a cluster of buildings on the south side of Bloomington’s courthouse square 30 years earlier. The adaptive re-use of the historic structures as Fountain Square created a community destination currently housing around 60 locally-owned businesses, including tech innovators Envisage and a number of retailers.
In addition to the preservation of Bloomington landmarks, Mrs. Cook has spearheaded restorations around the state, most notably the French Lick Resort and the West Baden Springs Hotel. Mrs. Cook also may be credited with co-founding the Monroe County History Center, where she continues to play an engaged, supportive role. “While accomplishing big goals,” Hamilton noted in his New Year’s Eve remarks, Mrs. Cook has “kept her hand in the details, quite literally — cleaning and sorting the donated jewelry for the annual history center sale, and personally painting ceramic tiles for several of the many landmarks she has saved.”
Prompted by the occasion of the Bicentennial to identify a historical distinction fitting to honor particularly notable residents, city officials established the Freedom of the City as an honor to be awarded annually. With roots in ancient Rome and active usage since medieval times, the honor, a precursor to a Key to a City, historically awarded the right to move freely within a municipality, among other privileges. In the City of London, which has been awarding a Freedom of the City since the 13th century, for example, honorees have included Florence Nightingale, Nelson Mandela, and J.K. Rowling.
Since its founding in 1963, Cook Group has grown into one of the nation’s largest private companies, working in life sciences, business services, resorts, property management and medical devices. Headquartered in Bloomington, Cook Group serves a global market and employs over 12,000 people worldwide.
“Gayle Cook’s vision and hard work have played an invaluable role in fueling Bloomington’s robust entry into our third century,” said Hamilton. “Her contributions have been so extraordinary, we had to search the archives for a distinction worthy of her. With the Freedom of the City, we hope to shine a light on Gayle’s remarkable example.”