(MONTGOMERY CO.) – Indiana State Police have released the name of the trooper who they say shot and killed a Montgomery County man last Friday night, but questions still remain regarding the incident.

Police say Glenn Rightsell was shot by Trooper Daniel Organ alongside U.S. 231 on December 28 after he reached for a gun. Trooper Organ has no disciplinary record and he’s presently on administrative leave, according to police.
Video shot by a neighbor shows the moments just after Rightsell was shot, but it’s the moments before that, not captured on camera, where most of the remaining questions begin. 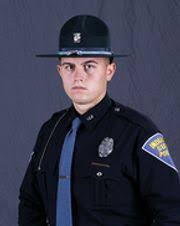 Daniel Organ
“We just want to make sure we do a complete and thorough job for the family and also for the officer that was involved in the shooting,” said Indiana State Police Sergeant Kim Riley.
ISP is handling the investigation and confirmed Wednesday they have no body cam or dash cam footage of the shooting.

Glenn Rightsell
Rightsell’s family said he was working on his daughter’s car, which had broken down on U.S. 231 earlier in the day. Authorities said a state trooper stopped to investigate and saw Rightsell had a gun on his waist. Authorities say Rightsell reached for that after failing to comply with the trooper’s commands, causing the trooper to fire. Rightsell later died at a hospital.
His family said Rightsell had called police earlier to report the broken down car to make sure it wouldn’t get towed before he got a chance to look at it on his own.
“We are looking into seeing about that,” said Riley, “we have not located a phone call at this time or any type of conversation with police departments.”
State police said even if that’s true, the trooper still had reason to investigate.
“Even if we knew about that car being there, we’re still going to check and see,” said Riley. “We want to make sure that person isn’t needing any help.”
The Montgomery County Prosecutor’s Office won’t release any 911 calls or dispatch records, citing the ongoing investigation. The trooper involved is on routine paid leave as authorities continue to investigate.
“When the case is completely finished, to the best of our ability, it’ll be turned over to the prosecutor’s office for review,” said Riley.
Rightsell’s funeral is set for Friday, according to his family.