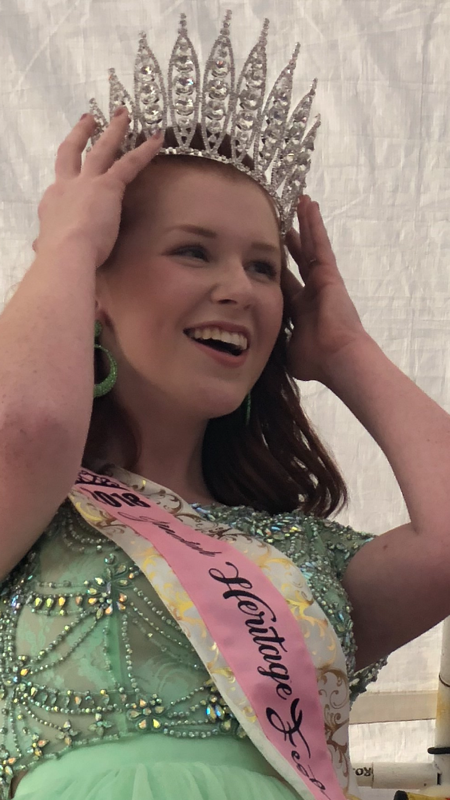 Hayse was a sixteen-year-old Junior at BNL High School. She aspires to attend Ivy Tech specializing in Radiation Therapy after graduation. Queen Hayse is the daughter of Jeff and Joni Hayse of Springville. Taylor also competed in the 2017 Oolitic Fall Festival Pageant where she also earned the Queen title.
Queen Taylor Hayse court for the 2018 Judah Heritage Festival was: 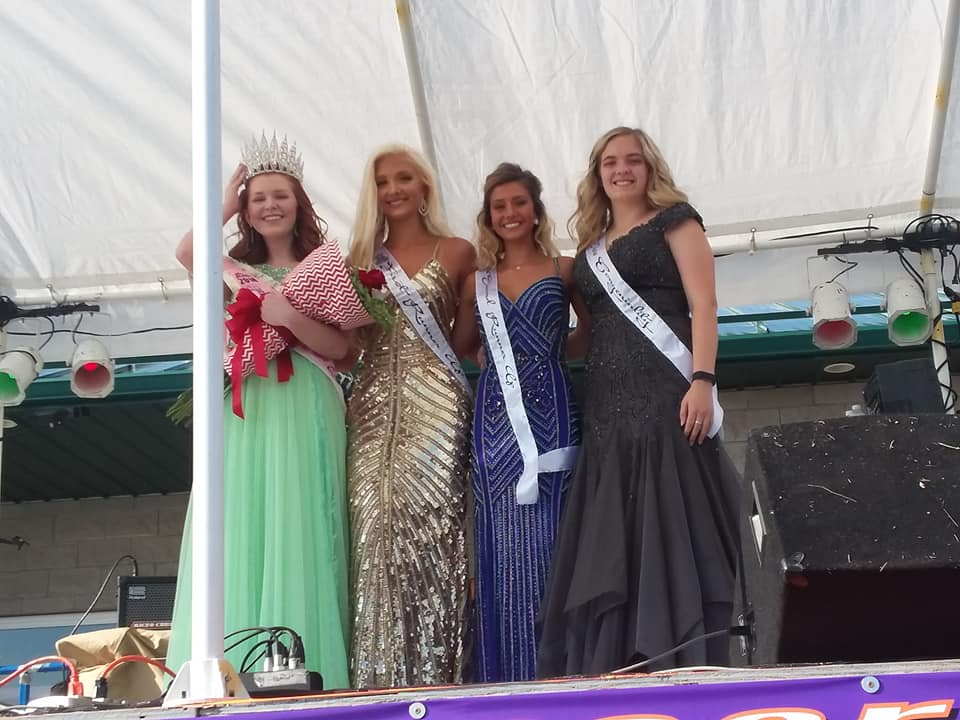 First Runner-Up was Sarah Peterson. Sarah will begin college this fall at IUPUI studying Nuclear Medicine. Sarah is the daughter of John and Terri Peterson of Bedford.
Second Runner-Up, Alexis Lindsey. Alexis is a Senior at BNL High School with plans attending IUPUI studying radiology specializing in the study of ultrasound. Alexis is the daughter of Greg and Holly Davis and Jim Lindsey, all of Bedford. Alexis was also awarded Miss Awareness for raising nearly $300 for cancer research.
Jasmine Heckard was named Miss Congeniality. Heckard, of Bedford, will attend college this fall studying Human Resource Management minoring in Education Policy.
Katie Fishback received the Directorship award for being most helpful, most positive with good sportsmanship during the pageant process.
Jury Finds Nathan Baker Guilty of Murder
A jury found Nathan Baker guilty of killing 52-year-old Tom Tharp and 82-year-old Alan Sims, both of Shoals. He was also found guilty of two felony counts of burglary, two felony counts of theft and a felony charge of auto theft.

Martin County deputies discovered Tharp’s body after he was reported missing by his family.
Martin County Deputy Kevin McBeth arrived at 8030 Fred Sims Road, north of Dover Hill at 9:53 a.m. on August 26, 2015, to see if he could find Tharp. While checking a detached garage on the property, Deputy McBeth found the body of Alan Sims. The body was lying on the garage floor. Sims had died from a single gunshot wound.
Police believed Baker was a suspect in Sims’ death and began a search to locate him.
Baker had previously lived on Sims’s property and had been asked to leave. Police then learned that Baker had been seen on the property multiple times within the last several days.
Police issued a request to other law enforcement agencies to be on the lookout for a 1997 Pontiac Sunfire that belonged to Tharp.
Around 2:17 p.m., Lawrence County deputies located the Pontiac traveling northbound on State Road 450. After attempting to initiate a traffic stop, Baker fled, leading police on a high-speed pursuit that ended on State Road 158 after Baker crashed the Sunfire. He was arrested without incident around 2:32 p.m.
During a search of the vehicle, officers located a shotgun believed to be the murder weapon.
While officers continued to search Sims’ property for evidence, an officer located a shoe and a short distance later located the body of Tharp lying in a garden covered with debris. The body was found about 30 yards south of the detached garage. Tharp had also died from a single gunshot wound.
In a second document released by the Martin County Prosecutor’s Office, Baker also faces two counts related to an incident that happened just days before the double homicide investigation. In that case, documents state that Baker broke into a cabin near State Route 450 and stole several items. For that case, he’s charged with felony burglary and felony theft.
A third document released by the Prosecutor’s office charges Baker with felony auto theft. In that case, Baker stole a vehicle from the Loogootee IGA on August 23. Baker admitted to stealing the vehicle.
Former Coach And Substitute Teacher At Linton-Stockton High School Arrested
A former Bloomfield cheerleading coach and full-time substitute teacher at Linton-Stockton High School was arrested on two felony counts of child seduction. 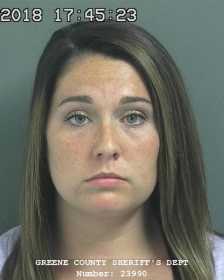 Indiana State Police arrested 23-year-old Morgan Judy on a warrant on charges of child seduction by a child care worker with sexual intercourse or other sexual conduct with a child and child seduction child by a care worker engaging in fondling or touching a child 16-17 years old. She was booked into the Greene County Jail, posted bond and was released.
Accounting to a Greene County Circuit Court probable cause affidavit, the warrant was issued Friday after Indiana State Police were alerted by Bloomfield School officials in May that Judy was allegedly involved in a sexual relationship with a student.
The student told Indiana State Trooper Brad Stille in an interview that Judy invited them to a through Twitter to the party.
The student first told the Trooper the two had only kissed there was no sexual relationship.
Trooper Stille then interviewed Judy, who claims she was intoxicated at the party and denied kissing or having any sexual relations with the student. She later admitted to kissing the student but didn’t remember it due to the level of her intoxication and said she probably had invited the student to the party.
Police obtained a search warrant for Judy’s and the student’s cell phones. That is when the student admitted the two did more than just kiss.
Judy continued to deny allegations of a sexual relationship.
Police uncovered conversations between Judy and the student about giving each other “huge hickies” and Judy telling the student not to tell anyone about them and to delete all of their text and Twitter messages, her contact information and to stop calling and texting her.
She admitted to police she had deleted all conversations with the student on her cell phone saying it looked bad.
Patoka Lake Named “Best Guys Getaway” In Indiana
Patoka Lake is the best spot in Indiana for guys to get away and fish, according to the readers of Electric Consumer magazine.
Electric Consumer readers voted the 8,800-acre lake in Dubois, Crawford, and Orange counties as their favorite fishing spot.
Patoka Lake offers more than 160 miles of shoreline and plenty of fishing opportunities, according to property manager Jason Hickman.
“Crappie populations are numerous, with some weighing more than two pounds,” Hickman said. “If you are looking for bass, many tournaments bring big bass in larger than 6 pounds.”
The DNR has stocked walleye in Patoka for more than five years. Patoka also has an excellent catfish population with nearly 40-pound catfish caught every year.
Monroe Lake, West Boggs Lake, and Cecil M. Harden (Raccoon) Lake also received votes.
Troy Pritchett To Serve As Interim Mitchell High School Principal
Troy Pritchett, assistant principal at Mitchell High School, will serve as the school’s interim principal following the resignation of Sean Vandeventer.
The Mitchell school board approved the recommendation from Mitchell Community Schools Superintendent Steve Phillips.
Vandeventer resigned as principal in May with an effective date of June 30. He accepted a job teaching industrial arts at Eastern Greene schools.
Bedford Man Arrested On Child Molesting Charges
An 18-year-old Bedford man was arrested on a warrant after police say he molested a 1-year-old girl. 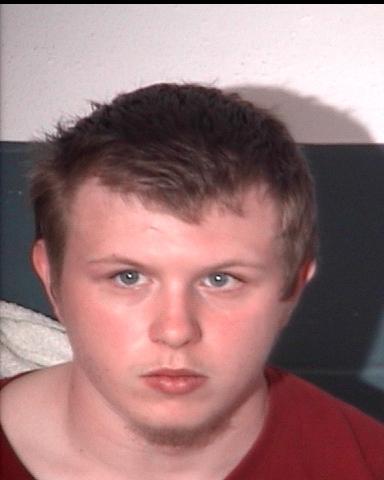 Police arrested Lloyd Wilson Jr. on two counts of child molesting.
According to a Lawrence Superior Court II probable cause affidavit, a woman went to the Bedford Police Department to report her child had been molested. She said she noticed redness and bruising while changing the child’s diaper. She confronted Wilson, who admitted to her he had touched the girl.
The child was eventually taken to Peyton Manning Children’s Hospital at St. Vincent for an examination.
On May 31, a BPD detective spoke to Wilson who admitted to touching the toddler in a sexual manner.
Wilson was arrested and taken to the Lawrence County Jail where is he being held on a $50,000 surety or $5,005 cash bond. He remains in jail today. On November 11, Wilson changed his plea to guilty to one count of child molesting. Judge William Sleva has taken the plea under advisement. Probation was ordered to prepare and file a presentence report.
Skylar Tucker Crowned 2018 Greene County Queen
Linton’s Skylar Tucker and Switz City’s Kaitlyn Frye were crowned 2018 Miss Greene County Queen and Miss Greene County Princess. 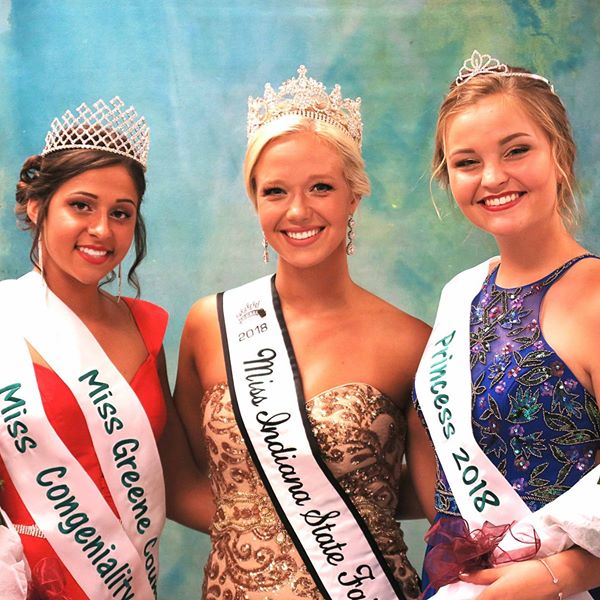 She was crowned by 2018 Miss Indiana State Fair Queen Audrey Campbell.
Tucker was also chosen for the title of Miss Congeniality.
Caitlin Emmons of Lyons was named second runner-up, Taylor Whitfield of Bloomfield as runner-up and Kaitlin Frye of Switz City as Princess.
North Lawrence Career Center Received Indiana Department of Education Audit Results – Corrective Actions Needed
Officials from the Indiana Department of Education met with North Lawrence Community Schools administrators and counsel in June regarding the results of the audit of the North Lawrence Career Center.
The audit, which was requested by North Lawrence Schools Superintendent Gary Conner in March, was in response to allegations of reporting irregularities at the North Lawrence Career Center.
The findings from the audit involve personnel, financial penalties, fraudulent reporting, and spending, as well as student grades, transcript integrity, and attendance issues. The IDOE was clear that due to the nature and severity of the findings the document is an interim audit and the case would remain open until the IDOE was satisfied that the school corporation made sufficient corrective measures and was in compliance with all State and Federal requirements.
One of the most important findings was a result of inaccurate reporting to the State for 30A funding, and the failure to have properly licensed teachers providing instruction during 2016-17 and 2017-18, $404,750 must be reimbursed to the State.
Employees in Lawrence County Resturants Test Positive for Hepatitis A
The Lawrence County Health Department issued warnings after a Mitchell Papa John’s delivery driver and employees at Mamma’s Mexican-Italian Restaurant, Marco’s Pizza and Burger King in Bedford tested positive for Hepatitis A.
The health department held Hepatitis A vaccine clinic after each reported incident.
Anyone who consumed food and drinks at the establishments was told to monitor their health for symptoms of the disease for up to 50 days after exposure.
Symptoms include loss of appetite, nausea, tiredness, fever, stomach pain, brown-colored urine and light-colored stools. Yellowing of the skin and eyes also may appear. If any of these symptoms develop, residents were told to stay at home and contact their doctor immediately.
Officials say it’s important to wash your hands with soap and warm water frequently and thoroughly, especially after using the bathroom, to prevent the spread of Hepatitis A.