Early this morning Jackson County police reported the fire was out and fire crews have begun cleaning up the property.
Employees were not at the metal fabrication business located on U.S. 50 East midway between Seymour and Brownstown when the fire started. 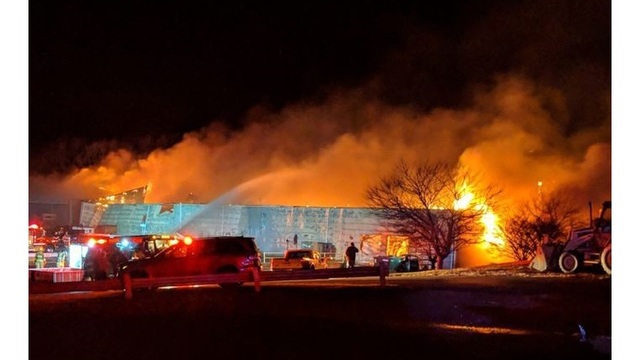 Photo courtesy Jackson County Sheriff’s Department
The fire destroyed at least two buildings.
Brownstown Fire Chief Travis McElfresh says firefighters arrived less than two minutes after the fire was reported just after 9 p.m. The fire breached every side of the 18,400- square-foot building and then spread to a second 15,465-square-foot building.
McElresh says getting water to the scene was difficult. Every fire department in Jackson and Bartholomew counties responded to haul water to the scene. Seymour Fire Department sent an aerial truck to help battle the blaze.
Another concern is the building housed explosive materials, but none of those chemicals exploded.
The cause of the fire remains under investigation by the State Fire Marshal Mike White.
The buildings sit upon a 3.45-acre site owned by Royalty Investments, who bought the business in 2004.