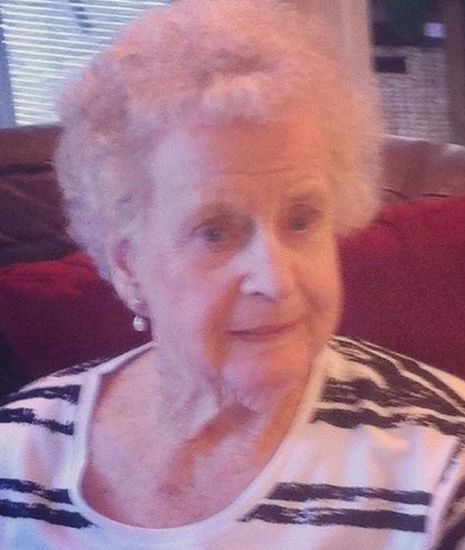 October 5, 1926 – November 14, 2018
Adele B. Cobb, 92, of Bedford, died on Wednesday, November 14, 2018, with her family by her side.
She had been residing in an assisted living facility in Melbourne, FL since her stroke in 2013. Her daughter, Ann, lives nearby and assisted in her care. Her husband, Doyle A. Cobb of Bedford preceded her in death, also her parents, sister, Audrey and two brothers, Neville and Colin. She was born in Ascot, Brisbane, Australia on October 5, 1926. She attended Hamilton State School in Brisbane. Her parents were William Henry Byers and Maude Adelia Eliza (Crowe) Byers, they had five children. Adele is survived by one brother, Kevin Byers, 93, who lives in Brisbane, Australia.
Adele came to the United States in 1946, after marrying Doyle A. Cobb in Brisbane, Australia on August 25, 1945. Adele and her elder sister, Audrey, sailed on the Mariposa to their new home on June 13, 1946, when they saw the Golden Gate Bridge for the first time. Then they boarded the Brides Train to travel across the country to their new homes and husbands. Adele arrived in Indiana on June 18, 1946. They raised five children and were married for nearly 66 years. Adele was a homemaker while raising their five children. In 1977 she began her working career. She worked for the U.S. Census Bureau until 2002. She also worked in Bedford as a real estate agent for many years. Doyle and Adele co-owned The Toggery, Marathon gas station, and a nursing home in Bedford, Indiana. Adele was a great seamstress and did the alterations for The Toggery men’s clothing store. She was a member of the World War II Brides Assoc. and Phi Beta Psi Sorority. Adele was a great seamstress and did all the alterations for the men’s clothing store. She was also President of the PTA at Madden Elementary School where her children attended school
Surviving are two sons, Ronald D. Cobb, and wife, Sue, of Vallonia, Indiana and granddaughter, Sarah (husband, Jeremy) and great-grandchildren, Quorra and Xavier Cobb Winslow, of Honolulu, Hawaii, Michael E. Cobb, and wife, Helen, granddaughters, Rebecca, and Emily Cobb, of Melbourne, FL; three daughters, Ann Adele (Cobb) Ford and husband, Robert (Bob) Ford, grandchildren, Aimee Adele Whitlock, Amanda Brooke (husband, Shannon) Sturgil, and Dr. Robert C. Ford, III (wife, Holly), great-grandchildren, Madison, Christian Kai, Shaelen, Laken, Skylar, Brooklyn, Abigail, Charlotte, and Robert C. Ford, IV (Charlie), and a great great grandson, Jesiah, all of Melbourne, FL, Robyn L. (Cobb) Garland and husband, John, grandchildren, Dr. Josh Garland (wife, Sharon), Jeremy Garland, J.R. Garland, and Jordan Garland, great-grandchildren, Nicholas, Jack, and Sloan, of Jacksonville, FL and Jace, Kali, and Konnor, of Indianapolis, IN, Deborah D. Cobb and grandchildren, Melissa D. Blackwell (husband, Kyle), and Melinda G. Bridwell, great-grandchildren, Braydon, Bria, Brenlee, Adelyn and Joslyn of Bedford.
A Memorial Service and Celebration of Life will be at Elmwood Chapel of the Day & Carter Mortuary on Friday, December 28th from 2 p.m. until 4 p.m. and service at 4 p.m. with the Rev. Charlie from St. John’s Episcopal Church
officiating.
Family and friends may express condolences at www.daycarter.com.