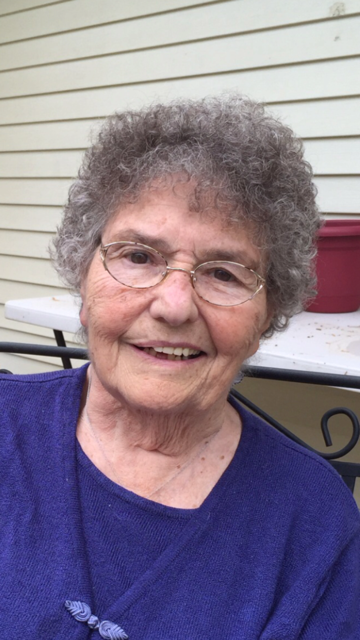 February 11, 1929 – October 7, 2018
Marian A. Deckard, 89, of Bedford, passed away on October 7, 2018, at St. Vincent Dunn Hospital, Bedford.
Born February 11, 1929, in Bedford, Indiana, she was the daughter of Arthur and Gladys (Crockett) Keller. Marian attended Bloomington High School and was a member of Burgoon Baptist Church. She retired from Kroger after 24 years and later worked for Jackson County Bank in Bedford.
She is survived by two daughters, Kim Knapp, Marla (Hal) Crittenden; son, John Deckard; 12 grandchildren, Josh, Toby ,Matt, Brady, Brandy, Derek, Greg, Cody, Zach, Lacey, P.J. and Robbie; Several great-grandchildren; several nieces and great-nieces; and special friend, Wilma.
She was preceded in death by her parents; children, Marcia Kay in infancy, two sons, Doug and Randy; brother, David Keller; two sisters, Virginia Clark, and Margie Boshears; close family friends, Eddie and Wanda.
Funeral service will be on Wednesday, October 10, 2018, at 11:00 AM at Ferguson-Lee Chapel of Thorne-George Family Funeral Homes. Burial will follow in Hanson Cemetery. Visitation will be on Tuesday, 6-9 PM at the funeral home.
Online condolences may be sent to the family at www.fergusonlee.com.
Alan Douglas Armstrong – Springville
August 13, 1950 – October 5, 2018
Alan Douglas Armstrong was born on August 13, 1950, in Bedford, Indiana to Don B. and Rose Bridwell Armstrong.
Alan was a seventh generation cattleman, farmer, and educator. Alan was a 1968 graduate of Smithville High School. He received his bachelor and master’s degrees in Education and Administration from Indiana University. Alan married Sharon Turner Armstrong on June 5, 1976, and she survives.
He started his teaching career at Kirksville Elementary School and was an original teacher at Lakeview Elementary
School. He taught third, fourth, fifth, and sixth grades. He was an educator for 43 years and he retired from
Lakeview Elementary School in 2015.
Alan had a passion for farming starting at a very young age. At twelve, he purchased his very own cattle. He continued the growth of the family farm over the last 56 years to a productive 3,060-acre beef cattle, hay, and crop farm. Alan had a strong stance in preserving farm ground and being a steward of the land through soil and water conservation. Alan continued to grow the family farm to 1500 beef cattle with 500 brood momma cows.
After retirement, Alan and family purchased Standish Farm Supply in 2015 to continue the feed mill staple that serves Lawrence and surrounding counties. Along with his wife, Sharon, as well as his daughter, Ashley and her husband, Heath, they purchased a farm and developed a rustic wedding venue, The Loft At Walnut Hill Farm, LLC. The entire Armstrong family has purchased Bar P Ranch, LLC to continue the tradition of original owners, Charlie and Esther Parton. Throughout his life, he was involved with 4-H from a 10-year member to a qualified Indiana 4-H horse and pony judge. Alan even ventured into a new avenue of hosting cross-country racing events including the Popcorn IXCR and the Crossroads Race at Bar P Ranch.
Alan has always been a very active member of the Springville Feeder Auction, following in the footsteps of his father, who was one of the developers of the auction barn. Alan served as the Area II District Director and member of the Indiana Beef Cattle Association starting in 2017 to bring more awareness of the beef cattle industry to our consumers. He has also been an active member of the Lawrence County Cattleman’s Association. Alan has earned several awards including the Lifetime Achievement Award from the Lawrence County Beef Cattle Association as well as the Lawrence County Cattleman’s Association Outstanding Cattleman of the year in 2008. He has also been an active member of the Lowder Cemetery Board since 2009.
He was a long- time member of the MCCSC Literacy Foundation.
Alan was not only a beloved teacher, a dedicated cattleman, and farmer, but also a family man. He had quite a sense of humor and could captivate any audience with his storytelling and speeches. Alan was very involved in his three daughters lives, never missing a sports game, a 4-H project, or a horse show. He continued his love for his five grandchildren, showing them the passion of life and the farming ways of our past generations.
He always reminded us to live life to the fullest each and every day and quoting him “what legacy will you leave
this earth with?” You, sir, left this earth as the greatest dad, papaw, husband, cattleman, and teacher!
Alan was preceded in death by his dad, Don Armstrong; mother, Rose B. Armstrong; sister, Leslie Armstrong Wilson Hassfurder, and a brother, Mark Edward Armstrong (in infancy).
Survivors include his wife, Sharon Turner Armstrong, of Springville; brother, Joe H. Armstrong (Trudy), of Springville; three daughters, Amy Spires (Cam), of Springville, Dr Ashley Armstrong (Robert Heath Prince), of Springville, and Allison Deckard (Levi), of Bloomington; five grandchildren, Caden Spires, Casen Spires, Olivia Prince, Garrett Prince, and Ayla Deckard.
Funeral services will be conducted at 10:30 am on Thursday, October 11th in the Elmwood Chapel of the Day & Carter Mortuary with Pastor Doug Kelley officiating. Burial will follow in the Lowder Cemetery. Visitation will be from 3 p.m. to 8 p.m. on Wednesday, October 10th and from 9:30 am until the hour of service on Thursday at the Day & Carter Mortuary.
The family asks that friends consider memorial contributions be made to Lowder Cemetery, Springville Feeder Auction, Lawrence County Horse & Pony Club or Lawrence County Beef Club.
Family and friends may express condolences at www.daycarter.com.