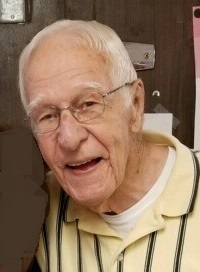 May 21, 1933 – September 30, 2018
Raymond Aubrey Tarver, 85, of Bedford, died Sunday, September 30, 2018, at I.U. Health Bloomington Hospital.
Born May 21, 1933, in Oxford, MS, he was the son of Joe Aubrey and Minnie (Spruill) Tarver. He married the love of his life, U V “Ginny” Watts on March 30, 1956, and she survives. He had worked for the Illinois Central Railroad. In 1976, he opened and was owner and operator of Tarver’s Indiana Flower Shop. He was a veteran of the U.S. Army. He was a member of the Free Methodist Church since 1976, Gillen Post #33 American Legion, and was a Red Coat Volunteer at St. Vincent Dunn Hospital. For several years he had a daily routine. Hardee’s for breakfast, lunch with his buddies at McDonald’s, and Burger King, Arby’s or Captain D’s for dinner. After dinner, the group would do crossword puzzles from the newspaper.
Survivors include his wife, “Ginny”, of Bedford; a daughter, Cindy Robertson and husband, Steve, of Springville; grandchildren, Jonathan Smith, of Bedford, Jennifer Caswell and husband, Travis, of Owensburg, Joshua Smith (Kyiana Boone), of Bedford; great-grandchildren, Lyric Smith, Reece Caswell, Ahyonna Smith, Morgan Caswell, Ayden Smith, Mason Smith, Josephine Caswell, and Arayah Smith.
He was preceded in death by his parents, two sisters, Lillian Knight, and Nell Reeder; a grandson, Joseph Smith.
Funeral services will be conducted at 11 a.m. on Saturday, October 6th at the Free Methodist Church with Pastor Scott Salm officiating. Burial will follow in the Old Union Cemetery where military rites will be accorded by members of Gillen Post #33 American Legion. Visitation will be from 4 p.m. to 8 p.m. on Friday, October 5th at the Free Methodist Church.
Family and friends may express condolences at www.daycarter.com.