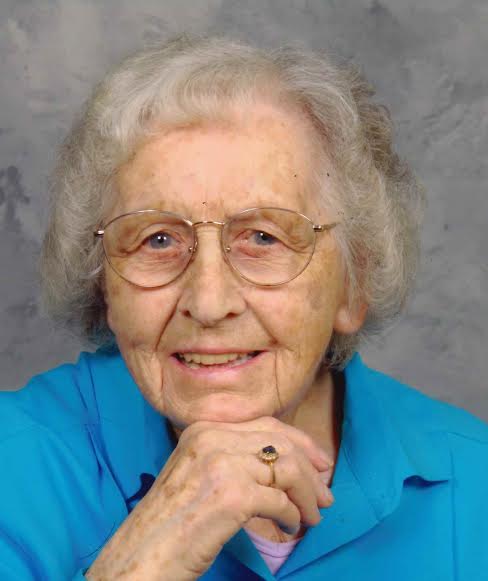 March 7, 1925 – August 25, 2018
Evelyn Joan Casada, 93, of Bedford, left this world peacefully on Saturday, August 25, 2018, to walk thru the gates of Heaven to meet her Lord and Savior and to joyfully reunite with her family.
Born March 7, 1925, in Hareleston, Norfolk England to William Charles and Gladys Maude Oakley. She later met and married Claude Leon Casada on January 6, 1945 and spent her honeymoon in a bomb shelter in London England before coming by the troop ship the Queen Mary to New York and then a train to Mitchell, IN to become the first English war bride in Lawrence County.
Joan was retired from Extruded Alloy and was a minister’s wife as well as a homemaker. She was the most loving and loved person you ever met. Joan and Claude ministered to many in southern Indiana, Little Cincinnati Church, Bartletsville Church and were devout members of Dive Christian Church, all of whom were counted and loved as family.
She was preceded in death by her husband, Claude; her daughter, Sharon Ann Brown and her son, Trevor Leon Casada.
Joan is survived by her grandchildren, Gregory Alan Brown and wife, Margaret, Hillary Elbert and husband, Byron, Chrissy Hagan and husband, Ronnie; great grandchildren, Joshua Brown and wife, Jacinda, Mackenzie Welch and husband, Chris, Zachary Ryan Hingtgen, Zane Thompson and Gregory Brown, II, Gladys Yvonne Hagan, James Michael Hagan, Veronica Dobbs and husband, Christopher; multiple great great grandchildren, nieces and nephews, and longtime friend and caregiver, Jenny Thompson.
Visitation will be from 10 a.m. until the hour of service on Wednesday, August 29 th at the Dive Christian Church. Funeral service will be conducted at 2 p.m. on Wednesday, at the church. Burial will follow in Beech Grove Cemetery.
Pallbearers are: Gregory Brown, Joshua Brown, Jon Bex, Zachary Ryan Hingchen, and Donald Thompson.
Family and friend may express condolences at www.daycarter.com.