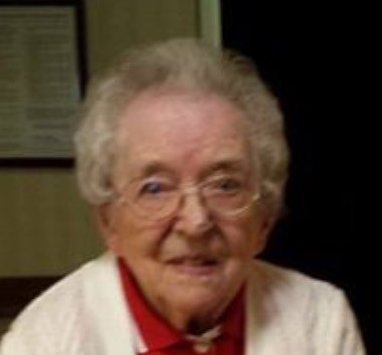 September 17, 1918 – June 13, 2018
Lola Crane, 99, of Bedford, died at 12:28 am on June 13, 2018 at Stonebridge Health Campus.
Born September 17, 1918 in Lawrence County, she was the daughter of Ernest and Nettie (Davis) Nellinger. She first married Rev. Horace Bailiff and he preceded her in death in 1947.
She then married Hobson Crane on July 2, 1950 and he preceded her in death in 1984. Lola was an accomplished seamstress, making clothes since 1942. She opened Lola’s Drapery Service in 1966 and retired in 1996. Lola was a member of First United Methodist Church, where she taught Sunday school and was involved in the Methodist Women’s Society and graduated from Smithville High School in 1935.
Lola leaves to cherish her memory, her daughter-in-law, Marietta Bailiff of Bedford, grandsons, Bryan (Lisa) Bailiff of Bedford, Brad (Tanna) Bailiff of Mitchell, Bart Bailiff of Bedford, and Jeff (Lucy) Crane of Covington, GA; granddaughters, Dorothy Ginder and Jennifer (Tom) Studer, both of Fishers, several great grandchildren and great great grandchildren; and many nieces and nephews.
She was preceded in death by: Parents, two husbands, Rev. Horace Bailiff and Hobson Crane; one son, Ernest Bailiff, one step-son James Crane, one daughter-in-law, Lois Crane, two step-daughters, Irene Bohlander and Frances Julian, and nine brothers and sisters.
Funeral services will be conducted at 10 a.m. on Friday, June 15, 2018 in the Elmwood Chapel of the Day & Carter Mortuary with Rev. Richard Bell officiating. Burial will follow in Tunnelton Cemetery. Visitation will be from 4 p.m. until 8: p.m. on Thursday, June 14, 2018 at the Day & Carter Mortuary.
Family and friends may express condolences at www.daycarter.com.